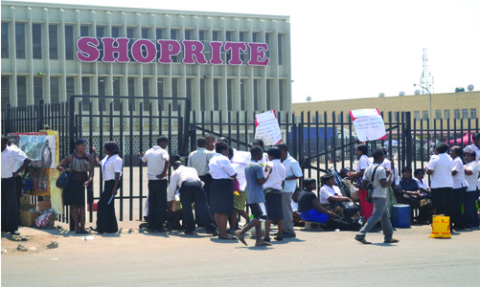 Shoprite Holdings Ltd. (SHP), Africa’s biggest grocer, fired almost 3,000 workers who are striking over pay and conditions in Zambia, according to a union.

The Cape Town-based company dismissed the employees yesterday and told them they can reapply for their positions after a strike began on Oct. 14, Robert Musanje, president of the National Union of Commercial and Industrial Workers, said by mobile phone today from Lusaka, the capital. The strike continues, he said.

“We were busy trying to persuade the workers to return to work yesterday,” Musanje said. “As we were doing that, we received a shock that the management of Shoprite had decided to dismiss all the workers.”

Shoprite runs 21 stores in Zambia, Africa’s biggest copper producer, and nine Hungry Lion fast-food outlets, according to its 2013 annual report. The country has the most Shoprite stores outside South Africa, the report shows.

Konkola Copper Mines Plc, the Zambian unit of Vedanta Resources Plc (VED), said in May it would cut 2,000 jobs after costs rose and prices for the metal fell. The company reversed the decision in June after holding talks with government and unions.