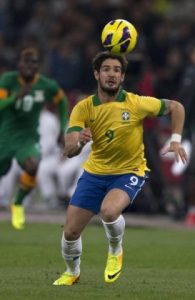 ZAMBIA yesterday kept five-time world champions, Brazil on their toes before going on to lose this tough historic international friendly encounter at the iconic Bird’s Nest Stadium in Beijing, China.
This first-ever meeting between the FIFA 2014 World Cup hosts and 2012 African champions also marked interim coach, Patrice Beaumelle’s first international assignment for the Chipolopolo since taking over the top job from his former boss and mentor, Herve Renard last week.
And Beaumelle did not disappoint on his first day in office as his under-strength Chipolopolo squad took the FIFA 2014 Confederations Cup champions punch-for-punch for almost an hour before the Selecao grabbed their fourth win in a row.
Despite the chaotic preparations which saw an ugly tug-of-war between DR Congo club, TP Mazembe and the Football Association of Zambia (FAZ), the Chipolopolo, who were missing six key players, still put up a splendid showing before an ecstatic crowd.
After a nervy start, Beaumelle’s men managed to contain the Brazilians for the first 45 minutes and it had to take a triple substitution by Luiz Felipe Scolari for Brazil to break the deadlock.
At restart, Scolari threw in Hulk, Oscar and Jo for Alexander Pato, Lucas Moura and Ramires and the changes paid dividends for the Selecao.
However, it was Zambia who almost opened the scoring on 51 minutes, but Emmanuel Mayuka failed to tap in at the near-post Fwayo Tembo’s pass with Brazilian goalkeeper, Diego Cavalieri at his mercy.
Moments later, Tembo also saw his shot saved by the goalkeeper before Kennedy Mweene came out on top against Neymar in a one-on-one duel.
Chelsea forward, Oscar finally managed to break the Zambian hearts on 59 minutes when he scored with a looping deflected shot that gave the impressive Mweene no chance at the far-post.
Seven minutes later, Neymar, who had arguably one of his most frustrating matches managed to win a free-kick using his trickery on the edge of the box.
He quickly delivered an audacious cross which defender Dede rose unchallenged to head past Mweene, effectively sealing the victory for Brazil.
But the Chipolopolo never gave up the fight and responded quickly with some neat passes but Tembo’s final effort was headed away.
The introduction of James Chamanga for Mayuka brought a new lease of life in the Chipolopolo attacks as Zambia took control of the game, but still lacked the killer instinct at goal.
Beaumelle’s men made the Brazilian backline work overtime with Scolari forced to rest a visibly tired David Luiz, who was skipper of the day in the absence of injured regular captain, Thiago Silva.
Mweene denied to be beaten twice by Oscar when he bravely snatched the ball from the feet of the Chelsea man, who had waltzed past Bronson Chama.
Zambia’s last chance of reducing the deficit came two minutes into stoppage time when veteran Noah Chivuta, a replacement for Tembo, shot wide after being set-up by Jacob Mulenga.
Earlier in the first half, Neymar almost gave Brazil in the second minute with a fantastic free-kick which cannoned off the cross bar and Mweene did well to punch away the rebound.
Skipper Christopher Katongo, who had sight of the goal two minutes later, took long to make a decision before the ball was snatched off his feet.
With the Chipolopolo growing in confidence, Ramires failed to put Brazil ahead on 14 minutes when his shot, after some beautiful display by the Selecao, narrowly went wide.
Diminutive defender Emmanuel Mbola had the first real scoring opportunity for Zambia in the 17th minute but his low cracker was ably dealt with by the goalkeeper.
A minute later, Hichani Himoonde, who marshalled the Chipolopolo backline well with Chama, made a brave tackle to stop a marauding Neymar in his tracks.
Brazil, who were using the Zambia match as part of their preparations for next year’s World Cup, will next face Honduras next month.
Despite the loss, the Chipolopolo, who are out of contention for a ticket to Brazil next year, can still move with their heads high after making the star-studded Brazilians work extra hard to win this fixture.
Line-ups:
Zambia – Kennedy Mweene, Chongo Kabaso (Jimmy Chisenga 62nd), Emmanuel Mbola, Bronson Chama, Hichani Himoonde, Kondwani Mtonga, Chisamba Lungu (Bruce Musakanya 86th), Emmanuel Mayuka (James Chamanga 66th), Christopher Katongo (Joseph Musonda 91st), Jacob Mulenga (Roger Kola 93rd), Fwayo Tembo (Noah Chivuta 76th).
Brazil – Diego Cavalieri, Dani Alves, Dede, David Luiz (Henrique 70th), Leiva, Lucas Moura (Oscar 46th), Alexander Pato (Hulk 46th), Neymar (Bernard 79th), Maxwell, Ramires (Jo 46th), Paulinho (Hernanes
63rd).
Referee – Fani Qi (China)