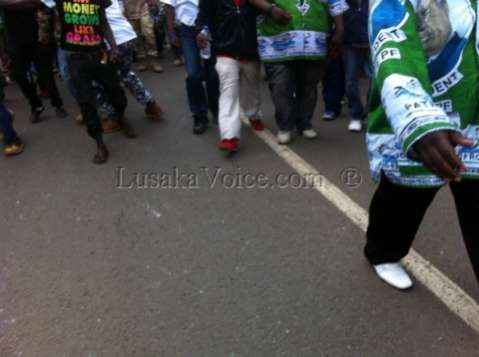 HOME Affairs Minister Edgar Lungu says the Patriotic Front (PF) will have to pay for the property that was damaged at Northmead Primary School after cadres clashed.

Mr Lungu said he had discussed with the Minister of Education John Phiri to pursue the party for the damage of property at the school.
Recently, cadres from the ruling party clashed at Northmead Primary School following internal party differences.
“The matter has already been discussed, we agreed that the Ministry of Education should pursue the party to pay for damages of the property at the school. The ministry of Education is currently handling the matter,” he said.
Mr  Lungu said Government would not protect anyone engaged in illegal activities whether from the opposition or ruling party.
“The law would be applied evenly to everyone, no one is a sacred cow when it comes to the application of the law,” he said.
And People’s Party president Mike Mulongoti appealed to political party leaders to prevent their cadres from engaging in violent activities.
Mr Mulongoti said if the trend was not stopped, it might turn into something very serious which Zambia could fail to contain.
“The growing trend of violence must be stopped because it might affect all of us. Violence knows no boundary, it might affect anyone if unchecked,” he said.