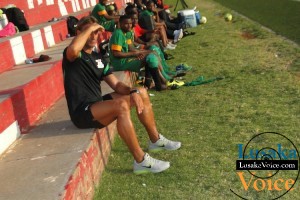 AS the Chipolopolo kick off preparations for arguably the most important assignment this year – the decisive FIFA 2014 World Cup qualifier against Ghana, midfield ace, Rainford Kalaba believes pressure will be on the Black Stars in the Group D clash.
And South Africa-based striker Collins Mbesuma, who is struggling to shake off an ankle injury, said he had not yet given up on making the Chipolopolo squad for the Kumasi outing.
The Chipolopolo set up camp at their customary Johannesburg training site in South Africa yesterday in readiness for next Friday’s crucial match against the Black Stars with seven local players beginning preparations in earnest.
Kalaba said in an interview from his DR Congo base that the Chipolopolo just needed to go to Kumasi with a positive attitude as Ghana would be under pressure in Kumasi not to disappoint their home fans.
Despite Ghana boasting of a star-studded squad, the Chipolopolo playmaker said in modern football, names did not count, but that only good performance could do the trick on the pitch.
“Anything can happen if we go with a positive attitude. In modern football, you don’t play names but only the performance on the pitch can do and if we apply all the tactics the coach will give us, Ghana are the ones who are under pressure because for us, we are aiming for one thing only – winning,” Kalaba said.
Kalaba starred in the Chipolopolo’s two 1-0 victories over the Black Stars last year – during the Africa Cup (AFCON) semi finals in Bata, Equatorial Guinea and the World Cup qualifier first leg at Levy Mwanawasa in Ndola.
He said the Chipolopolo, who trail the Black Stars by a single point in the group, just needed to apply all the tactics coach Herve Renard would prescribe and victory would be guaranteed.
The TP Mazembe player said, while Ghana would have a lot on their minds, the Chipolopolo only had one mission in Kumasi and that is winning the September 6 match and storm the last round of the Brazil 2014 World Cup qualifiers.
Zambia needs to beat Ghana to surge to the last round of qualifiers, while the Black Stars, who lead the group on 12 points, only need a draw to progress.
Meanwhile, Mbesuma said from Johannesburg yesterday that he would join the Chipolopolo camp on Sunday and that his involvement in the Ghana
assignment would be determined by the team medical staff led by Joseph Kabungo.
The Orlando Pirates marksman said he was feeling much better and that he had even started training.
Mbesuma was reportedly expected to be out of action between six and nine weeks due to an injury.
The Chipolopolo burly striker sustained an injury during Pirates’ MTN8 match against Supersport United in Mbombela two weeks ago.
Renard reserved his comments for the September 6 match, saying:”I receive a lot of calls from our friends from Ghana, they always say the?same ‘winning’. The best is to talk on the 6th of September. I’m sorry.”
On his return to Ghana where he was assistant coach for the Black Stars, Renard said: ‘‘It’s a big pleasure (to return to Ghana) but my biggest pleasure will be to beat them’’?He also said he had been in touch with Mbesuma and that it was a good thing that he had started training normally this week.
The Frenchman said out of the 26 players he had summoned for camping, only 23 would make the trip to Kumasi.
Apart from Mbesuma, Mamelodi Sundowns’ newly-recruited midfielder, Mukuka Mulenga, is another doubt for the September 6 fixture because of an injury.
In a related development, Chipolopolo team manager, Lusekelo Kamwambi has said the local-based players left for their training camp on a South African Airways morning flight yesterday.
Kamwambi said from the team’s Milpark Holiday Inn camp that Renard was expected to record a full house by Monday after all foreign-based players, including those in South Africa, join the squad.
The local players in camp are Danny Munyau (Red Arrows), Joshua Titima (Power Dynamos), Kabaso Chongo (Konkola Mine Police), Christopher Munthali (Nkana), Kondwani Mtonga (Zesco United), Bronson Chama and Bruce Musakanya (Red Arrows).
The Football Association of Zambia (FAZ) has assured that the Chipolopolo were determined and would be ready for the Ghana challenge.
Zambia beat Ghana 1-0 twice in a space of four months last year; they knocked out the Black Stars at the 2012 AFCON finals co-hosted by Equatorial Guinea and Gabon last year in February and beat the West Africans again in June in the FIFA 2014 World Cup qualifier in Ndola.