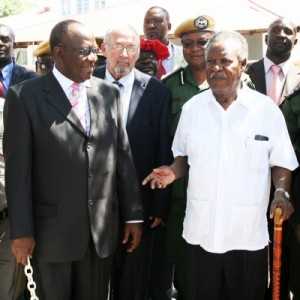 GOVERNMEMNT will upgrade the security it provides around the Litunga of Western Province by erecting police posts in crucial areas such as the Limulunga, Lealui and Libonda palaces to ensure continued stability in the province Minister of Home Affairs, Edgar Lungu, has said.
Mr Lungu said the security of the Litunga is of paramount importance and no stone shall be left unturned as the State ensures his security and that of the people of Western Province.
“I want to state for the record here that we shall provide all the security the Litunga needs in order to ensure continued stability in Western Province and the Litunga in particular,” Mr Lungu said.
Mr Lungu added: “Similar security measures will be extended to all paramountcy around the country because of the crucial role they play in uniting and governing Zambia. We shall protect the Litunga and all traditional rulers in Zambia whose importance cannot be over emphasized.”
He was speaking after paying a courtesy call on the Litunga in the company of Minister of Defence, Geoffrey Mwamba, and Western Province permanent secretary, Emmanuel Mwamba, on Saturday.
Mr Lungu said: “What we discuss with the Litunga is that he has a problem, he needs a police station in Lealui…I have assured him (the Litunga) that I will look into the matter as quickly as possible and we put up another police station again.”
Mr Lungu said it is important that the Litunga should have a police station near him because there are a lot of things which are happening in the area.
“Even these Barotseland secessionists’ activities will be reported there [police station]. But without a police station, then it will be very difficult for the police to apprehend them. It is important and it is a genuine request,” Mr Lungu said.
Meanwhile, police have arrested 45 Barotseland secessionists while a ‘mastermind’ and a primary school teacher, who was hosting meetings of Barotseland activists, have gone into hiding after they were tipped that authorities were tracking them.
The mastermind has only been identified as Mombotwa and primary school teacher as Masiye.
Among the 45 Barotseland activists, 27 were arrested in Kalabo, nine in Senanga and nine Mongu, many of them youths aged between 23 and 37 arrested between August 14 and 17.
Emmanuel Mwamba, the provincial permanent secretary, told journalists in Mongu on Saturday that Mr Mombotwa who declared himself as administrator general was scheduled to hoist the flag of Barotseland last Thursday.
Mr Mwamba and Mr Lungu said security alerts have been heightened in Western Province to ensure that stability continues to reign, including peace and unity.