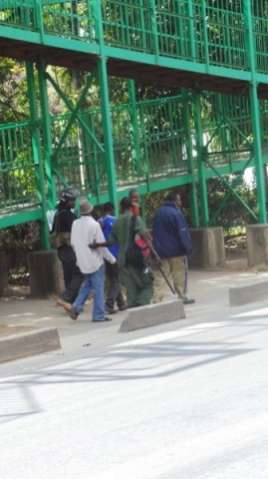 ABOUT 16 Copperbelt University (CBU) students have been arrested for alleged riotous behaviour.
Copperbelt Police chief Mary Tembo confirmed the arrests and said the students were among those who took part in a riot in the early hours of Sunday.
The students blocked Jambo Drive and the Nkana East road with logs which they were burning and threw stones at other road users over the continued accommodation challenges at CBU.
They further organised themselves and gathered around town centre where other students put up their mattresses and beddings.
Ms Tembo said the officers dispersed the unruly students in the early hours of yesterday but she was surprised that they mobilised themselves and went into town.
“We have arrested 16 students who were part of those that engaged in unruly behaviour by burning logs in the middle of the road. They were throwing stones and blocked Jambo and Nkana East roads,” Ms Tembo said.
“We managed to disperse them but we were surprised that some students organised themselves and booked buses and went into town and that was where we arrested them.”
Police in riot gear fired teargas canisters to prevent the irate students from causing further damage to the institution and kept vigil around the town centre.
And CBU Vice-Chancellor Naison Ngoma warned the students against engaging in unruly behaviour.
Professor Ngoma, who addressed the students around 03:00 hours yesterday, said it was important for them (students) to follow rules and regulations.
He maintained that the institution would not allow squatting at campus and that security officials, who conducted the operations, were peaceful and did not chase any student.
Copperbelt University Students Union (COBUSU) president Oscar Mbewe said the riot was allegedly caused by management which directed security officers to conduct a check to remove squatters.
Mr Mbewe said the operation annoyed the students and that was what led to the riot.
Mr Mbewe said it was disappointing that management conducted an operation without involving all stakeholders.
He said most of the students left the institution and more than 30 of them spent a night at the Freedom Statue around town centre.