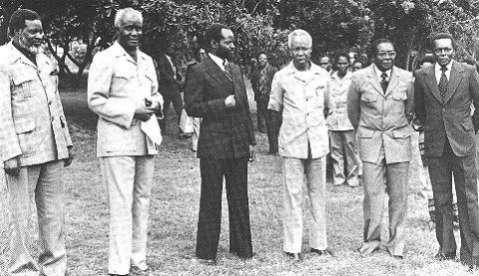 FORMER President Kenneth Kaunda says late former British Prime Minister Margaret Thatcher was a good leader although she had a different perception about southern African politics.
Dr Kaunda said on BBC’s News Day Magazine programme yesterday that Ms Thatcher looked at political challenges in southern Africa differently.
“She was a good person but completely something different when it came to southern African politics in those days,” he said.
Dr Kaunda said his personal relationship with Ms Thatcher was not easy because she took an adverse approach on decisions in southern Africa.
“It was not easy because she and former US President Ronald Reagan took an adverse approach to racism in southern Africa. They were very supportive of the racism regime.
“She and Mr Reagan said a lot of things, which showed that we were making different approaches to those problems. We were fighting for independence and they were fighting for continuation of what we thought were their trading partners; it was terrible,” he said.
Dr Kaunda said the exchange of hard words and opinions with Ms Thatcher made things difficult for leaders in southern Africa to resolve their challenges.
“I must say that is what made things very difficult for us to get out together…that’s why when we called a conference in Lusaka, we organised a dance because we wanted to show her that we were not against her as a person,” he said.
Dr Kaunda said during the dance, Ms Thatcher enjoyed dancing with him and she realised that leaders in southern Africa did not hate her but simply opposed what she was proposing in the region.
Dr Kaunda said Ms Thatcher later began to realise that leaders in southern Africa had a genuine reason to fight the oppressive regime in the region.
He also said she did not do much to improve living conditions of people who were suffering in the region.
And British High Commissioner to Zambia James Thornton said in a statement in Lusaka yesterday that Ms Thatcher played her part in the resolution of the conflict over the Old Rhodesia.
“One of her first foreign policy initiatives was to oversee the Lancaster House talks that led to the transition to an independent Zimbabwe under the majority rule,” he said.
Mr Thornton said Ms Thatcher was a “towering figure” in British and world politics and that her actions were sometimes controversial, but she certainly had resolve.
“The privatisation of inefficient state-owned enterprises by her government set an example that much of the world followed; Zambia is among those countries that have benefitted economically by following suit,” he said.
A book of condolences in memory of Ms Thatcher has since been opened at the British High Commission in Lusaka.