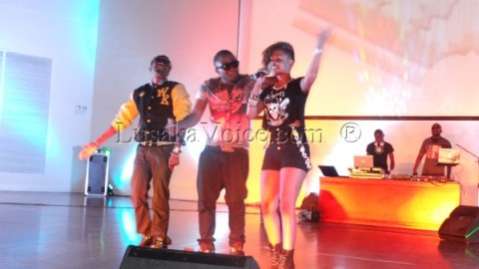 THE Easter weekend was this year celebrated with a Nigerian touch which saw people from different walks of life celebrating and dancing on Easter together at the Lusaka’s LIV night club along Kafue road last Friday where Nigerian artist Ice Prince teased the audience with the ‘Oleku’ song that left the audience craving for some more.

The show which started with performances by local artists was initiated by the Nigerian high commission featured OC,CQ , Kay Figo, Magg 44, POMPI and  Marcky2, who made an announced appearance on stage which sent the crowd into a frenzy as they danced the kopala dance.

The man of the night could not hide, even when he tried to the crowd spotted him from the VIP suit where he was warming up from before he began his performance, as he made way to the stage fans could not hide their anxiety and craving for his performance, fans made it difficult for Ice Prince to easily get on stage no matter the tight security that was at the show, the man of the night couldn’t get through to the stage even when he had Zambia police escort.

When he was about to perform people had already started singing Oleku and superstar, these two songs proved to be the most popular songs amongst the Zambian fans and were songs of the night.

Ice who only performed less than an hour didn’t not see it easy with fans who wanted more of his music, he however managed to escape freely as he invited them for the main show which scheduled for Saturday at the new government complex.

Saturday was yet another amazing night graced with awesome performances by various local artists including upcoming rapper Cleo Ice Queen who sampled her tracks which left the crowd marveling and screaming Nick Minaj in Zambia as she left the stage.

The night was full of Nigerian rhythm and the Nigerian Ambassador  Sifau Momoh  was present to witness the talk of the town event, no sooner had ice prince appeared on stage had the audience moved from the back seats to the stage.

The superstar singer could not hide his gratitude when he said “I didn’t know that Zambians love me as much as you are showing me now, you people are great, thank you for your support, and I love you more,” he said in his Nigerian accent throwing kisses to the audience.

The night was full of fan that even children could not suppress the pressure of music, two siblings aged between nine and eleven stayed awaked till midnight just to have a glance at the superstar singer the children could not be held as they sneaked their way passing the body guards to join ice prince on stage and danced to the superstar hit song like professional dancers, ice prince marveled at this welcomed the two to the stage and danced with them as they both sang along to the superstar song.

Ice prince pulled out an awesome surprise which left the audience guessing what he would do next when he invited Zambian artists CQ and upcoming artist ice queen Cleo, everyone wondered why he invited them as they too could not even guess the reason, and they performed a freestyle collaboration track as a way of showing unity in Africa, he also invited the Nigerian ambassador on stage and sang a tribute song for as he addressed her as his mother.

As he retired from the stage he made his CDs rain to the fans that almost caused stampede as age was no restriction, it was even harder for him to leave the stage the crow followed to have his autograph signed on their CDs but they did not see it the easy way as security could not allow them to get even an inch closer to him, he later signed and headed to his vehicle for his last performance at the after party at News cafe’ at Arcades.

Speaking after the show ice prince only had few words “I love Zambia and Zambia loves me, this is not the last of Zambia” he said

And speaking in an interview after the show ………who was guest of honor at event she joyously said she was humbled by the support by the Zambian people, and that the show had been a success,

“The show was amazing and the turn out simply shows the kind of cordial relationship that exists between Zambian and Nigeria, this is the beginning to build the future for Africa as youths are the leaders of tomorrow from the show we are all able to tell that the two countries are willing to work together to take Zambian music on the world map like Nigeria has, it is very evident,” Momoh said.

However upcoming rapper ice queen said she would be recording a remix of a track titled ‘tswada’ with ice prince  later this month.