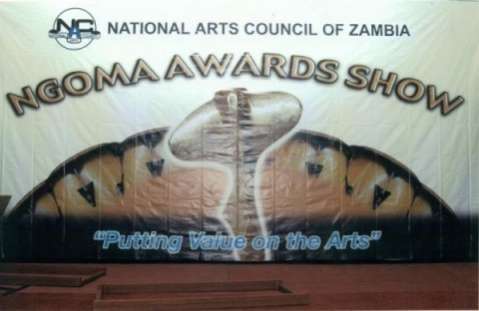 Tweet
The Ngoma is an annual Zambian Arts awards ceremony recognising the nation’s artistic talent traversing disciplines. The awards are sponsored by the National Arts Council of Zambia and bestowed to those who have excelled in the country and the diaspora.
Description

The Ngomas were first awarded in 1997 to honour all deserving artists who have excelled in their disciplines, including: singers, writers, painters, sculptors, dancers, poets, composers, master of ceremonies, producers, directors, actors, comedians and any persons or groups creating art using their talents.

Their birth marked the beginning of a revolution and transformation of creative disciplines in the country, fueled by the National Arts Council’s motto “Putting Value on the Arts”. The awards have ignited hardwork, provided encouragement and competition amongst artists, all vying to produce work that will be nominated in the various categories, across disciplines affiliated with the National Arts Council of Zambia (NACZ).

Over the years the Council has transformed categories to be more inclusive and to showcase the array of talent across the country. Music has tended to be the most popular and has sometimes overshadowed other important and equally impressive contributions from other disciplines, by dominating the award giving ceremony. The NACZ have responded by discovering and highlighting other art genres such as literary works and has also worked to help provide funding for performance spaces for dynamic arts such Drama and Theatre, and to showcase static ones such as Painting and Sculpture, in order for more contributions to be available to chose from and recognise. It is also aware that the Media Arts is a fast growing category, with many production houses now creating sizeable television and film content, and is adjusting accordingly. With the Chairman’s award, the Ngoma Awards reach out to Zambians in the diaspora making contributions to the Arts around the world, which also rightfully deserve to be recognised

Though there have been a few years when the Ngoma Awards have not taken place, most recently in 2011, the NACZ is committed to overcoming the challenges and hindrances faced in the past to ensure a lasting legacy, with perennial awards without fail. Thankfully, sponsors from the public and private sector are stepping up their efforts to ensure that the highest form of recognition in the Arts in Zambia continues to award our country’s artists.