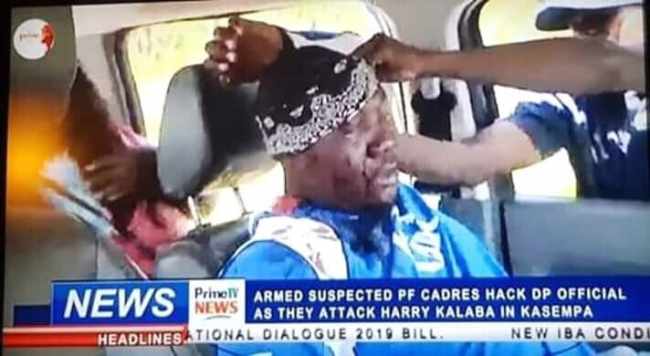 PF CADRES in Kasempa yesterday ambushed and attacked Democratic Party leader Harry Kalaba and his entourage. Upon arrival at Solwezi airport around 10:00 in the morning, Kalaba proceeded to Kasempa for his programmes with the entourage. When the entourage reached Kasempa turn-off where there is a police check point around 12:00 hours, a group of suspected PF cadres armed with pangas blocked the road and told Kalaba and his entourage that he would not be allowed to enter Kasempa.

The suspected cadres demanded that Kalaba should go back because they would not allow him to proceed into the town. After 10 minutes of arguing, the cadres started hitting Kalaba’s car. The cadres damaged Kalaba’s car before descending on DP national treasurer Justine Nkonge. The police at the checkpoint watched helplessly before running away.
Kalaba’s entourage tried to fight back but the panga-wielding cadres were unstoppable. At this point, with three vehicles being damaged, the entourage retreated.

After a five minutes’ drive, Kalaba told his group that his mission was not finished and he needed to go back.
“These that have attacked us, we wish them well. But I can say that the journey for liberation has started. Don’t be demoralised! Don’t get pangas and start fighting back. If we do so, we will be the same like these people. Let’s avoid it. And for me when you start seeing things like this happening, then you know you are getting stronger. The nation will know that you are going somewhere. When you are a nonentity how can you be followed? These people are suffering, their children have not gone to school,” Kalaba said.

“These are the politics of the PF. These are the politics that they have been practicing. We should always avoid such. We will always be provoked and the journey for liberation and freedom will be hard. It’s war. It’s catastrophic. But we will overcome. To run a nation like Zambia, the conviction should be very deep. Unless you go in the deep, you can’t make progress.”
North-Western Province PF chairman Jackson Kungo justified the PF cadres’ violent conduct.

“Yes, these are our cadres. North-Western Province is a no-go area for anyone who is fighting [President] Edgar Lungu. Yes, whether sent or not, we are here to protect the party. We are here to protect President Edgar Lungu. He is the President of the Republic and needs to be respected. If you fight President Lungu, we will defend him. So that Kalaba should know that North Western is a no-go area for these small parties and any opposition group,” said Kungo.

A defiant Kalaba changed the vehicle and used a private Corolla and proceeded to Kasempa. However, the PF cadres blocked the road and started searching vehicles. Upon noticing Kalaba, the cadres stoned the vehicle damaging its rear windscreen before the driver sped off.
Kalaba and his entourage, however, managed to get to Kasempa where he called on chief Kasempa at his palace.
Around 13:51, Kalaba reported the matter at Kasempa Police Station.