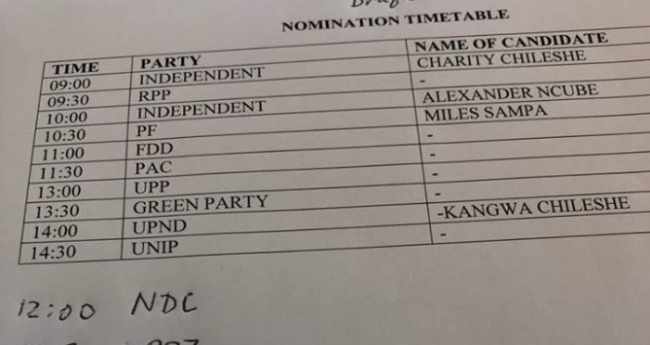 Nine candidates have successfully filed in nomination papers for the Lusaka Mayoral by-election slated for 26th July 2018, while EEP president Chilufya Tayali failed to file in his nomination papers.

Returning Officer, Alex Mwansa has confirmed to Q-news that all the nine nomination papers have been declared valid.

Others are Leslie Chikuse of the Republican Progressive Party; Mukubesa Mundia of the People’s Alliance for Change (PAC) has Mukubesa Mundia and United Prosperous and Peaceful Zambia (UPPZ’s) Madaliso Musukwa.

Mr. Mwansa says the Economic and Equity Party (EEP) Candidate Chilufya Tayali did not manage to file his nomination papers.

He says this was after Mr. Tayali and his supporters went to the nomination center 30 minutes after closure of the filing of nominations which was publicly done at 15:00hrs.