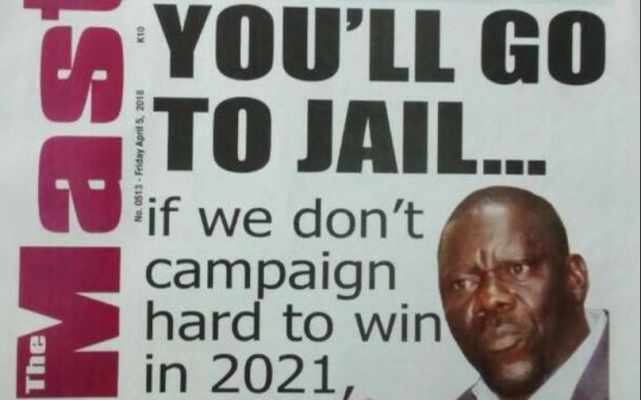 Lusaka, 4th April 2018 – While we do not expect the Mast Newspaper to withdraw its lead story in their edition for today, 4th April 2018, we expect a certain level of decency even from hostile media.

The Mast Newspaper, with intent to mislead the general public and thereby embarrass Hon Davies Mwila and Patriotic Front, runs with a fake screaming headline and story attributing it to PF Secretary General.

The Mast Newspaper is aware that the audio and words referred to were not of Hon Mwila but someone else yet they proceeded to run a story void of truth.

We demand that Mast Newspaper withdraws the said story and apologises to Hon Mwila in his capacity as Party Secretary General and the Patriotic Front at large. We want to believe there still resides some decency in the media house to acknowledge theirs was fake news and take responsibility for their own mess. We further wish the Mast Newspaper good luck in its endeavour to launder Mr. Fred M’membe especially after revealing information from Mr. Wynter Kabimba about homosexuality and atheism.

Lastly, we ask the general public to dismiss a statement attributed to NDC spokesperson Eric Chanda alleging that the ruling Party has paid K300,000 and bought a car for their Lusaka Province Chairperson Goodson Banda. We have no cause for going to such lengths and depths just to fish the NDC Provincial Chairperson. If at all Cde Banda is rejoining the PF as Cde Chanda alleges, it will be because the NDC is in dire want of a clear sense of direction. Things are falling apart, not just figuratively, in the NDC and any reasonable follower would have to think twice about staying.