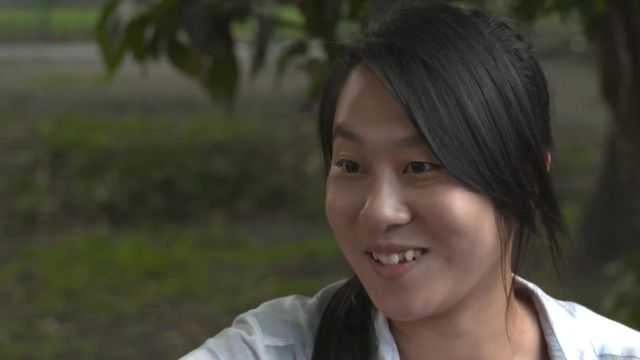 She may be the only Chinese student on campus, but Lu Cheng has her feet firmly planted in two camps.
Most of her friends at her business college in Lusaka are from Zambia.
Perched on a bench in the college grounds, she plays the guitar with her friends. At home her instrument of choice is the guzheng, a Chinese harp.
But for an older generation of Chinese migrant, the ease of transitioning between cultures is a lot harder.
It’s been seven years since Lu Cheng’s parents waved goodbye to China and headed west to find better business opportunities.
They now run a successful chicken feed factory, and although her father Lu Jin says he has made a few Zambian friends, he relies largely on his wife and daughter for company.
Lu Cheng confides that her parents are counting the days until she graduates, when they will have “done their duty” and can return “home” to retire. Compared to her friends’ parents, they’re far “more traditional”, she says.

Lu attends a business college in Zambia’s capital, Lusaka
Much of the sense of isolation and disconnection among the older Chinese across Africa seems to stem from the challenge of language.
Thirty-five years ago, English teachers were hard to come by in China. The legacy is a generation of Chinese nationals, thousands of miles from home, who rely on their own expat community for support.
But as new generations arrive, things do appear to be changing.
‘International experience’
Huang Hongxiang works at China House, a consultancy based in Kenya which tries to build ties between the African and Chinese business communities.
He admits that the Chinese who came to the continent over the past 20 years – working for big Chinese state corporations – gained a reputation of keeping to themselves to themselves and of being aloof, tough on employees and even a little bit distant.
More on China in Africa:
Chinese and Ivorian workers in Abidjan, Ivory Coast – July
Is China a brake on Africa’s progress?
What China hopes to achieve with first peacekeeping mission
Will Nigeria follow China’s lead?
The Chinese couple who have gone to work in Kenya
The BBC is running a special about China’s role in Africa linked to the China-Africa summit on 4-5 December in South Africa.
But there’s an explanation for this, he says. They didn’t know how to manage local workers and struggled to communicate – so their default position was to retreat into their own community.
But younger Chinese are arriving with “more international experience” and with a different view of the continent.

Many Chinese families move to Africa for better business opportunities
I found one factory worker nicknamed “Cherry” who had worked and studied in Switzerland, the UK and Madagascar before arriving to take up a post at a Chinese furniture firm in Kenya.
The transition has been “pretty easy”, she says. China has more in common with many African countries than many people think.
Hongxiang says that younger Chinese still retain the business instinct of their parents’ generation but “understand that the more you integrate, the more you get to know your market and see business opportunities”.
But it’s not only about cold, hard commerce – they also want to make friends.
Historical ties
It would be naive to gloss over the fact that like other countries, Zambia at times has had a strained relationship with its Chinese partners, especially in the rich copper belt in the north of the country.
There have been demonstrations challenging what Zambians see as the negligent approach to safety. Just a week before I visited, three Chinese nationals from the same family were murdered in the town of Kitwe in the north.
Deep historical ties bind the two countries and their communities together. It was back in the 1970s under President Kenneth Kaunda that the relationship with China began to take shape.
n
Zambia and China have a long-standing friendship
Zambia turned to China to help build the railways to export the copper from Zambian mines out through Tanzania when Zimbabwe was no longer an option.
Geoffrey Sakulande from Zambia’s Chamber of Commerce believes that relationship is growing warmer and stronger by the day.
Not simply because of better transport, communication and the internet but because a younger generation of Chinese migrant is now having a stronger personal stake in the country.