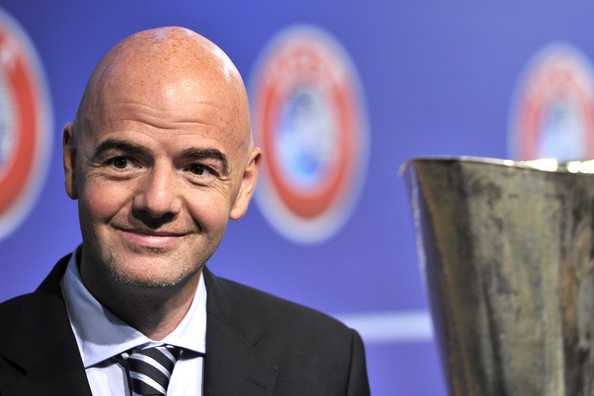 Uefa general secretary Gianni Infantino has entered the Fifa presidential election race – hours before the deadline for candidates.
Infantino joins suspended Uefa boss Michel Platini in the bid to replace outgoing president Sepp Blatter, 79.
Platini maintains he will stand despite Fifa saying it cannot recognise its vice-president’s candidacy while his 90-day ban is in place.
Blatter – who is also banned – will be succeeded at an election in February.

All candidates need the backing of five federations to be put forward for the vote.
Infantino is one of nine candidates to say they will stand, with the deadline for applications set at 00:00 GMT on Tuesday.
“We are delighted that Gianni has agreed to stand and he knows that he has our full support in his campaign to become Fifa president,” European football’s governing body Uefa said in a statement.
“He is in the process of submitting the required nominations and will issue a statement ‎on his candidacy later today.”
To date, South Africa’s Tokyo Sexwale, Prince Ali Bin al-Hussein of Jordan, former Trinidad and Tobago international David Nakhid, former Fifa deputy general secretary Jerome Champagne and Liberia FA president Musa Bility have said they have formally submitted their bids.
Asian Football Confederation president Sheikh Salman bin Ebrahim Al Khalifa is also expected to submit his candidacy before the deadline.
Alongside Sexwale and Bility, a third African candidate – former Nigerian international Segun Odegbami – has also announced his intention to stand.