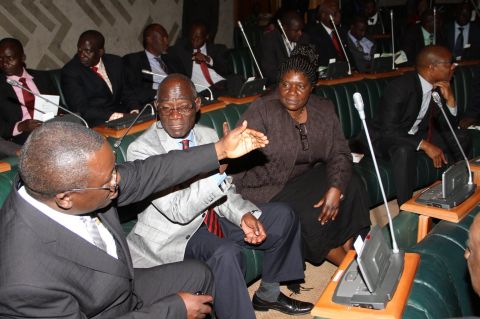 PARLIAMENT yesterday unanimously approved the establishment of five ministries as proposed by President Lungu during the ceremonial opening of the fifth session of the 11th National Assembly.
Members of Parliament (MPs) debated and adopted the motion entitled :Approval of Government Ministries and Departments : “That in terms of Article 44(2)(e) of the Constitution of the Republic of Zambia, this House do approve the abolition and the establishment of the Government Ministries and Departments established by the President as appended hereto.”
The new ministries include Ministry of Development Planning, Ministry of Higher Education, Ministry of Transport and Communication, Ministry of Energy and Water Development and Ministry of Fisheries and Livestock.
Contributing to the motion, Minister of Information and Broadcasting Services Chishimba Kambwili said the Patriotic Front (PF) administration decided to establish the ministries because it is a government of the people.

Mr Kambwili said it is unfortunate that the UPND, which is calling for the establishment of assemblies in all provinces, and appointment of ministers outside Parliament, claims that the PF has a bloated Government.
He also said challenges being experienced are as a result of poor planning by previous Governments and that the PF is trying to rectify things.
Choma Central MP Cornelius Mweetwa (UPND) said the establishment of new ministries is a welcome move but that the timing is wrong.
Mr Mweetwa, however, said UPND is only interested in splitting the Ministry of Agriculture into two ministries and that the party has welcomed the move.
Chipata Central MP Rueben Phiri (MMD) said he supports the establishment of the new ministries.
Mr Phiri said he has no option but to support the motion.
He called for the establishment of a ministry of Rural Development to help build rural areas.
Bweengwa MP Highvie Hamududu (UPND) charged that President Lungu is struggling to govern the nation hence coming up with new ministries.
He said these ministries will just put a strain on the national budget and called on the government to learn from Namibia how national planning operates.
Meanhwile, Minister of Agriculture and Livestock Given Lubinda says one million farmers in 13 districts in Zambia will benefit from the farmer input support programme (FISP) and the electronic voucher system for the 2015/2016 farming season.
Mr Lubinda told parliament in a ministerial statement yesterday that 759,000 small-scale farmers will be supported under FISP while 241,000 farmers will be targeted under the electronic voucher system.
He said the e -voucher system will be rolled out to other districts in the coming years.
“The e -voucher will give farmers a wide choice of inputs including livestock and fisheries inputs, as part of government push for agricultural diversification,” Mr Lubinda said.
The inputs will include veterinary drugs, fertiliser, seeds, fingerlings and fish feed.
Mr Lubinda said the e-voucher system will allow farmers to source their inputs directly from dealers instead of Government playing an active role in the supply and distribution of inputs.
President Lungu is scheduled to launch the e- voucher system on October 12, 2015.
“Under the FISP, Government will assist 759,000 farmers with fertiliser, maize seed, rice seed, sorghum, groundnuts, orange maize, soya beans, cotton, seed and sunflower,” he said.
Mr Lubinda said the increase in the number of supported crops under the conventional FISP is in pursuit of the Patriotic Front (PF) Government’s policy of diversification.
“More than 72,000 metric tonnes of D- compound fertiliser has been produced and distributed by Nitrogen Chemicals of Zambia while 60,790 metric tonnes of urea fertiliser has been imported, supplied and distributed to various districts by two private companies that were given contracts to supply fertiliser,” Mr Lubinda said.
He said the treasury has already managed to mobilise financial resources to pay all input suppliers for the said farming season.
Mr Lubinda told the House that farmers to benefit from FISP are being selected by the camp agricultural committees through their respective organisations, through farmer co-operatives.
He said the average subsidy across the crops for 2015/2016 agricultural season will be 72 percent compared to 66 percent in the 2014/2015.
Mr Lubinda has instructed the Food Reserve Agency to present him with the full schedule of maize purchases and payment.
And the minister told Parliament that Government has not allowed any importation of genetically modified organisms (GMO) food into the country.
Mr Lubinda said Government has no policy framework on the importation of GMOs into the country.
The minister was responding to a question by Mpongwe member of Parliament Gabriel Namulambe (PF), who wanted to know what Government policy on importation of GMO food stuff is .
Mr Lubinda said because of the lack of policy, government does not allow any importation of GMO food into the country until research is done to give guidance.