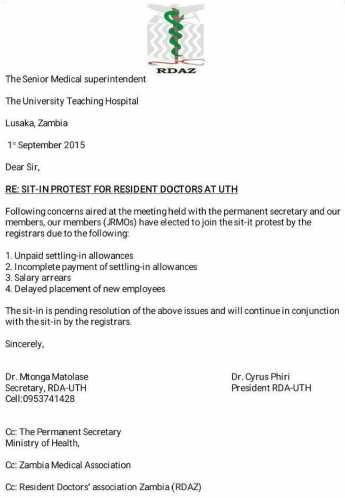 Medical doctors at the University of Teaching Hospital have gone on strike.
This is according to a memorandum dated 01 September 2015 signed by Resident Doctors Association UTH branch Secretary Dr Mtonga Matolase and UTH President Dr Cyrus Phiri addressed to UTH Senior Medical Superintendent.

Doctors at UTH resolved to join the sit in protest by the Registrar at the institution after a meeting with Health Permanent Secretary General Davy Chikamata Tuesday afternoon.
Dr Matolase said the junior doctors at the highest referral health institution in the country are aggrieved by the unpaid settling-in allowances.

He said the doctors are also not happy with the incomplete payment of settling-in allowances.
Dr Matolase said Government owes junior doctors in unpaid arrears.
Dr Matolase also disclosed that the junior doctors are aggrieved due to delayed placement of new doctors.
He said the sit-in protest will continue in conjunction with the one by the Registrars until all issues are resolved.