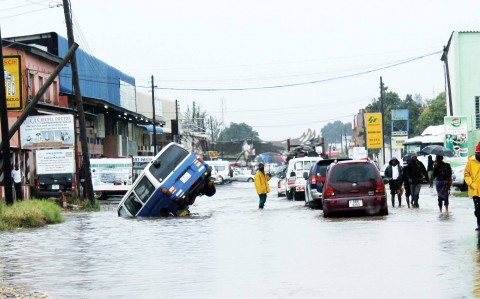 WORKS to improve the drainage system in Lusaka are in progress and will gobble up US$355 million over a period of five years, Local Government and Housing mMinister Emmanuel Chenda has said.
Meanwhile, Transport, Works, Supply and Communications Minister Yamfwa Mukanga said in a separate interview that Government would ensure that works on the drainage system in Lusaka are properly done.
Some major roads in the Lusaka were at the weekend flooded by heavy rains because of the poor drainage system in the city.
Mr Chenda said in an interview yesterday that the US Government through the Millennium Challenge Corporation (MCC) gave Zambia $355 million for a project aimed at improving water supply, sanitation and drainages in Lusaka over a period five years effective from November, 2013.
Drainage construction and expansion works in some sections of the city had since commenced and this would lead to greater control of flash floods in Lusaka.
He said equally, under the Lusaka 400 (L400) road project, Government had allocated funds towards the improvement of the drainage system in Lusaka and this would be done simultaneously with road paving.
“There is a lot of drainage construction and expansion work going on in Lusaka under the Millennium challenge project funded by the US Government and the L400 funded by our Government.
“When these works are completed, it is expected that the problem of flash floods in Lusaka would be a thing of the past as the solution will be long-term,” Mr Chenda said.
He said members of the public should not throw litter anyhow, as this contributed to clogging of drainages, making the flow of water difficult.
Mr Mukanga said Government will not allow shoddy works on the MCC and L400 projects as these were intended to clear the drainage system and ease the flow of water to reduce flooding.