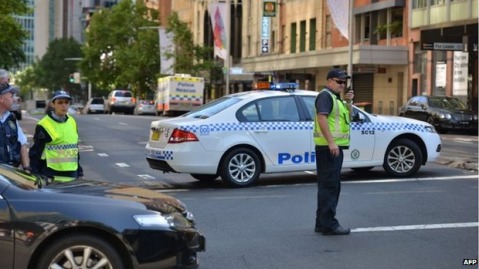 Several people have been taken hostage by at least one armed man at a Lindt cafe in the centre of Sydney.

At least three people have been seen inside the cafe with their hands up against a window, and holding up a black flag with Arabic writing.

He said it was not yet clear who was behind the incident but that it could be politically motivated, and that the National Security Committee had been briefed.

“I can think of almost nothing more distressing, more terrifying than to be caught up in such a situation, and our hearts go out to these people,” he said.

New South Wales Police Commissioner Andrew Scipione said the situation was not being treated as a terror incident, but confirmed there was “an armed offender in the premises holding an undisclosed number of hostages”.

He said the situation was contained in Martin Place – dismissing various reports of other incidents around the city – and that police were “doing all we can to bring this to a peaceful outcome”.

But he said police had not been in direct contact with the suspect.

The incident began as people were arriving for work in Martin Place on Monday morning.

Witnesses saw a man with a bag and gun walk into the Lindt chocolate shop and cafe. Police shut down the area, closing roads and moving people away. The Martin Place station was also closed.

The Lindt company said about 10 employees and 30 customers were thought to be inside. Nearby offices were evacuated and police asked people to remain indoors and away from open windows.

Shortly after, television footage showed at least three people, thought to be employees of the cafe and who were visibly distressed, holding a black sign with the Islamic creed written on it up to the window.

The BBC’s Security Correspondent Frank Gardner said the flag was similar to but not the same as that used by the Islamic State militant group in the Middle East.

An Australian Broadcasting Corporation reporter said that gunfire had been heard at the scene – but this has not been confirmed.

No injuries have been reported from the incident, according to a police spokesperson.

Martin Place is home to the state premier’s office and the headquarters of two of the nation’s largest banks. The state parliament house is also only a few streets away.

Courts in the business district have been closed for the day, and a number of banks have said they will not open.