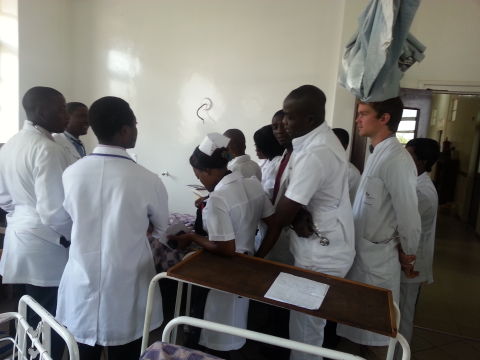 GOVERNMENT will upgrade  Livingstone General Hospital into a third level status of a central hospital on October 24 this year as the country will be celebrating 50 years of independence, Health Minister Joseph Kasonde has said.
Dr Kasonde said Government was satisfied that Livingstone General Hospital should be upgraded into a higher and third level status of a central hospital after examining how the hospital had been operating.
He was speaking in Livingstone at Zambia Airforce (ZAF) Mess yesterday when he officiated at the first-ever Southern Province combined graduation ceremony for registered midwives, registered and enrolled nurses for Livingstone Schools of Nursing and Midwifery and Macha School of Nursing.
“After examining how Livingstone General Hospital has been operating, I am satisfied that the hospital should be upgraded to a third level status of Livingstone Central Hospital. I want this to be effective on the Independence Day next month,” Dr Kasonde said.
He said transforming Livingstone General Hospital into a central hospital next month would give enough time before the beginning of budget implementation for 2015 and enable the institution to do final touches.
Dr Kasonde also urged the graduating nursing midwifery students to be compassionate, diligent and respect the confidentiality of their patients.
“This group of graduating students will be the last one for the Livingstone Schools of Nursing and Midwifery. I urge you to be compassionate and diligent as you execute the rest of your duties. Respect the confidentiality of your patients,”  Dr Kaonde said.
He said it was unethical to divulge one’s medical record as health medical information should only be a property of the patient.
Dr Kasonde said the graduation confirmed that Government was committed to a major increase in the training of nurses.
Speaking earlier at the same event, General Nursing Council representative Gertrude Phiri urged graduating students to bring positive change to the nursing profession and embrace public criticism to improve on their work.
Livingstone General Hospital acting medical superintendent Ntele Muzaza thanked the Government for supporting Livingstone and Macha Hospitals.