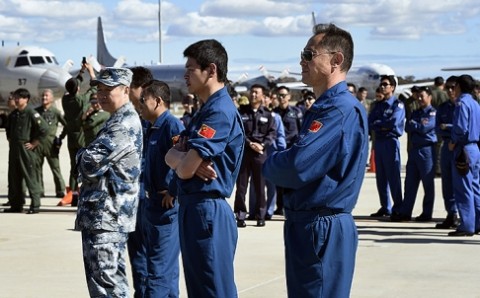 The search for Malaysia Airlines Flight 370 has unexpectedly called into question China’s rise, in particular whether it is ready to play the role of a global superpower.

The Chinese government has every reason to be concerned about the mysterious disappearance of the plane. First, 154 of the 227 passengers on board were Chinese citizens. Second, the plane was heading to Beijing, and its disappearance raised concerns of terrorism. Third, the plane’s last contact with air traffic controllers was over the South China Sea, while the search zone has since been expanded to cover the Indian Ocean – both of which are considered to be China’s “backyard”.

However, thus far, China has been but one part of the multinational search effort, and some would say it has played only a peripheral role.

From a diplomatic standpoint, China appears to have little leverage to deal with Malaysia, a comparatively small nation.

Since the aircraft’s disappearance, Malaysian officials have given ambiguous and contradictory information that may well have hindered search and rescue efforts. For instance, information that Malaysian military radar showed the plane had changed course was first revealed, then denied, and finally confirmed four days later by the prime minister.

In response, China could only urge Malaysia to be more open in sharing critical information. Beijing also delayed the delivery of a pair of pandas promised to Malaysia to mark the 40th anniversary of diplomatic ties between the two countries, in a merely symbolic gesture of displeasure.

China’s hard and soft powers continue to be tested. So far, they have been found wanting

China’s intelligence resources have also been sidelined. The task of looking into the passengers’ backgrounds was assigned to Interpol, while the FBI took charge of the forensic checks and data mining of the captain’s flight simulator.

The search operation has put China’s military preparedness and power projection ability to the test. Although it has dispatched 18 vessels, eight helicopters and three fixed-wing planes to join the search, it has struggled to keep pace with the shifts to different search zones, from the South China Sea to the Andaman Sea and then to the southern Indian Ocean. In contrast, the US naval force’s presence appears ubiquitous. Behind this preparedness is its extensive network of military bases in the region, including in Thailand and Singapore.

The hunt for MH370 has shone a spotlight on China’s technological capabilities, as well. The search corridor zone was established after data analysis by British satellite operator Inmarsat. China’s satellites lack the ability to keep global civil aviation under surveillance.

Meanwhile, the undersea search for the plane is being carried out by the US navy’s submersible robot Bluefin-21. Although China’s own manned submarine, Jiaolong, can reach a depth of over 7,000 metres, it is unable to survey a large area of ocean floor.

And, the mainland media has been lagging in reporting much of the major news about the search for MH370. China did appear to have led the world with the Xinhua report that it had detected underwater signals possibly from the missing plane. But this claim was quickly discounted.

As the hunt for Flight 370 goes on, so China’s hard and soft powers continue to be tested. So far, they have been found wanting; the best that can be said is that China has played the role of a regional power.