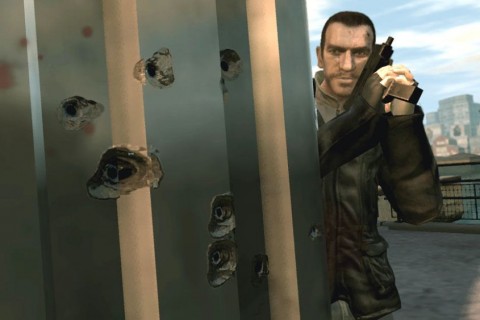 Three teenagers were trying to replicate the video game Grand Theft Auto in real life when they robbed a service station while drunk, a court has heard.

One of the boys threatened the console operator with a knife as another kept watch outside.

The offenders fled with cash and cigarettes.

Scott pleaded guilty to an aggravated charge of theft using force and was jailed for two years.

Sentencing the teenager, Judge Paul Rice said the console operator now had psychological problems from what had been a serious crime.

“On your version of the facts your memory of what happened was extremely disjointed,” he said.

“It was submitted that, in your alcoholic stupor, you tried to emulate or replicate the game in real life and rob the service station.

“The reality is that you are now in jail.”

“That game is a well-known and well-used game and this is the first time I’ve heard it said that it may have been the basis upon or the reason for which an offender then went on to rob a service station,” he said.

The judge said it was important to deter others from such offending.

“Service stations, particularly at night and in the early hours of the morning, are soft targets. They have little security and there are not many people around, if any,” he said.

The younger boys previously were dealt with by the Youth Court, but Judge Rice said Scott must be dealt with as an adult.

He was jailed for four years and 11 months, with a non-parole term of two years.

The boy who had the knife previously was sentenced to one month in detention and the boy who kept watch was given a suspended sentence.