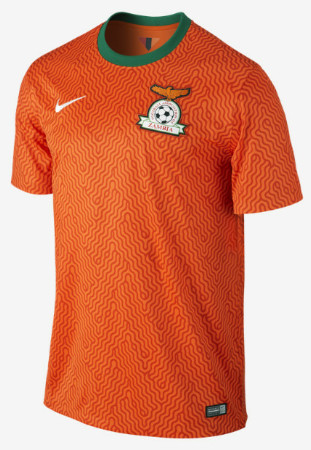 Football Association of Zambia technical sponsors Nike have unveiled the home and away kits that will be worn by the Chipolopolo (The Copper Bullets) during the 2014/15 international season.

The surprise 2012 CAF Africa Cup of Nations champions new primary and alternate shirts both use a mimimalist design with a ribbed crew neck and an intricate series of winding lines throughout. The line pattern appears to be inspired by West African art. The green home kit should see match action for the first time when Zambia travels to Tampa, FL to face 2014 World Cup bound Japan in an international friendly on June 6th.

Now ranked 74th in the world by FIFA, the current Chipolopolo squad features a lineup comprised of mainly African based players. The only Zambian national teamers currently plying their trade in a major European league are FC Sochaux’s (French League 1) Emmanuel Mayuka and Stoppila Sunzu