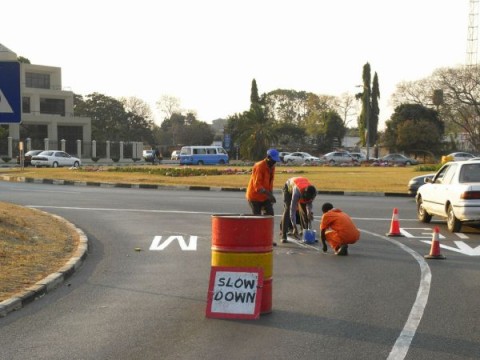 THE distribution of machinery to be used in implementing the Pave-Zambia 2, 000 road project countrywide has been launched.

And Government has directed the Road Development Agency (RDA) regional offices to ensure smooth implementation of the road project.

Transport, Works, Supply and Communication Minister, Yamfwa Mukanga flagged off the distribution of machinery to all the provinces at a ceremony in Lusaka yesterday.

The minister said after the distribution of the equipment, work was expected to commence fully in all the provinces.

“Reports of abuse or vandalism of parts will not be tolerated. We must ensure that we guard against these vices and ensure that the Pave Zambia 2,000 road project succeeds,” Mr Mukanga said.

He said works under the Pave Zambia project launched by President Michael Sata in September last year had commenced.

He said in Lusaka, the paving of Nyerere Road in Chawama Township had started while in Eastern Province, a market area had already been paved in Petauke.

Mr Mukanga said among the benefits that would be derived from the project included employment creation.

He said the project would also restore the beauty and lost glory of towns while it would also reduce travel hours for road users.

Mr Mukanga said the project would also improve accessibility to social facilities such as schools, markets and health centres.

He said Government was committed to improving the socio-economic development of the people by ensuring that there was improved road infrastructure.

He said the Pave Zambia 2, 000 and the Link-Zambia 8, 000 road projects would help open up new routes to link provinces as well as some urban areas whose roads were in a deplorable state.

The Pave Zambia project, whose cost of implementation was approximately K1.6 billion, was also expected to create 20, 000 jobs, especially for the unemployed youths.

North-Western, Luapula, Northern and Muchinga, and Eastern provinces would have 150 kilometres of roads covered.
RDA Board chairperson Willie Nsanda said the Agency was committed to ensuring the success of road projects launched by Government in various parts of the country.

“The Pave Zambia project must succeed. Failure is not an option for us. I wish to pledge our commitment as an institution to this important road project,” Mr Nsanda said.