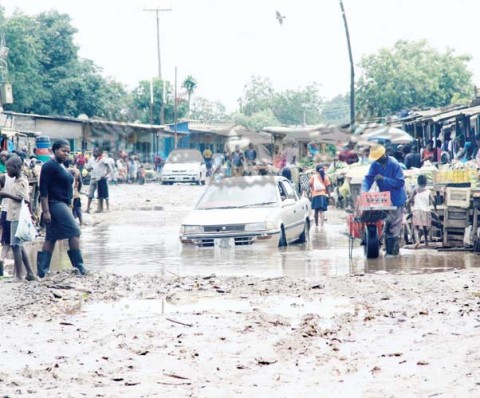 TORRENTIAL rains that characterised Lusaka over the weekend have left most of the city’s townships flooded and some property destroyed.
A check by a Zambia Daily Mail team yesterday found a number of township roads flooded and in certain cases impassable for vehicles following the heavy rains on Saturday and Sunday morning.
In the sprawling Kuku township, most roads were flooded while certain houses were surrounded by stagnant water.
At Kuku market, it was business as usual despite the flooded environment: traders were conducting business in the stagnant water as vehicles, especially small ones had a tough time passing through the muddy and slippery roads.
Some traders and residents had gumboots on while others waded through the contaminated water without protective shoes.
Some residents complained that the environment was unhealthy, unhygienic and prone to waterborne diseases.
Esther Phiri, a marketeer urged Government to ensure township roads are tarred and secured with proper drainages.
Ms Phiri said floods were a perennial problem in the township and that there is need for a lasting solution.
Jack Monze, a resident feared that with the onset of heavy rains, waterborne diseases such as cholera would soon break out.
Mr Monze also called for a lasting solution for floods in most parts of the city.
In Kanyama township, children were found playing in the stagnant water – oblivious of the health hazards – while most roads were impassable.
At Kanyama market, most marketeers and residents struggled to transact as the roads were extremely slippery.
A similar situation characterised Chawama and Chibolya townships.
At the famous Chibolya goat market, it was business as usual despite the place being unhygienic and slippery.