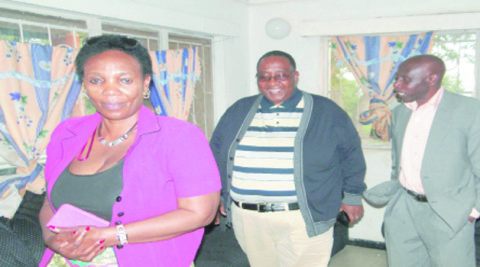 FORMER Defence Minister Geoffrey Mwamba says he has set his prospects on establishing himself as a commercial farmer and has maintained that his resignation from Government is final.

Mr Mwamba, who announced on Monday that he had resigned his Government portfolio due to conflict of interest related to outstanding issues between Government and the Bemba Traditional Council, however, said he was still a bonafide member of the Patriotic Front (PF).

He told journalists that he had been given an ultimatum to choose between his continued association with Paramount Chief Chitimukulu-designate Henry Kanyanta Sosala or being in President Michael Sata’s Cabinet.

Mr Mwamba, however, said he could not sever his relations with the Chitimukulu because the latter was his grandfather.

When asked about the public speculation that he would rescind his decision owing to an episode in 2010 when he withdrew his resignation as Kasama Central Member of Parliament, Mr Mwamba said such a notion had not crossed his mind this time.

Using a string of clichés, Mr Mwamba, in an interview at his residence in Kasama yesterday, said: “Lightning never strikes twice. Rescinding my decision is out of the equation. It’s water under the bridge. Aluta continua.”

He said he was actively looking for land, preferably in Chief Munkonge’s area, to establish his farm.

Mr Mwamba said resigning from Government was actually a relief for him as he would concentrate on his constituency by being closely involved in developmental programmes.

“I actually plan on spending more time in Kasama as my wife and I have planned to eventually relocate back here,” he said.

When prodded about Government’s response to his resignation, the Kasama Central MP replied that his decision to resign was not planned and was rather abrupt because of the events that preceded his announcement “I am only returning to Lusaka after New Year’s Day and I will then take my letter of resignation,” he said.

When asked if he would reassess his political career in view of his recent goings-on, Mr Mwamba said there was no need for it.