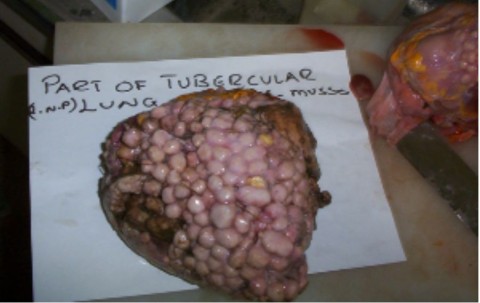 Tweet
In Zambia, the incidence of all forms of human tuberculosis (TB) is estimated to be 444 per 100,000. Many incidents occur in the Kafue area where TB occurs at a high level in cattle and antelope.
The causative agent of TB is a bacterium called a Mycobacterium. This bacterium has been detected in most cattle and the Kafue lechwe antelope that reside within the Kafue area. Kafue is a town in the Lusaka Province of Zambia on the north bank of the Kafue River. It is home to a major national park.

Researchers working in Zambia found M. tuberculosis in humans in this area of Zambia and they also found that M. tuberculosis bacteria isolated from humans and cattle respectively are related.

Then main causes of transmission from animal to human are probably by drinking unpasteurised milk and eating meat that has not been properly tested.

The research was carried led by Sidney Malama and conducted at the Norwegian School of Veterinary Science.

Charting zoonotic tuberculosis in livestock and wild animals in Zambia

Zoonotic tuberculosis, caused by Mycobacterium bovis, occurs in a large range of hosts, including humans, wild animals and domestic animals.

A doctoral research project has now described epidemiological and risk factors linked to the occurrence and spread of the disease in the wetland area of Kafue in Zambia. The thesis also puts forward strategies for controlling the disease.

Even though zoonotic tuberculosis occurs in all regions of Zambia, the disease is particularly rife in Kafue – a wetland area where the Kafue lechwe antelope (Kobus leche Kafuensis) is considered a reservoir for the bacterium M. bovis.

The research revealed that the cattle owners in this area know little about zoonotic tuberculosis. In order to control the disease amongst livestock, it is important to begin by finding out how much the livestock owners know about it and then allow them to become an integral part of the control strategy. If disease control is to be successful, it is essential that the livestock owners are included in the process, since the disease is so closely linked to their cattle herds.

Some of the most important risk factors related to the occurrence of zoonotic tuberculosis in livestock were found to be the size of the herd, the type of production and the choice of grazing strategy. Effective disease management involves gaining an overview of the herd populations at risk and the relevant risk factors.

Another closely related species of antelope, Black lechwe (Kobus leche smithemani), is not affected by zoonotic tuberculosis. This antelope lives in an area of Zambia where wild animals and cattle have no contact with one another, in contrast to the Kafue lechwe antelope, which is in constant contact with cattle. This indicates that cattle are a possible source of infection where the disease occurs in wild animals, and the characterisation of M. bovis strains isolated from cattle and Kafue lechwe antelopes in the same area supports this theory.

Musso Munyeme’s doctoral research gives a description of the relevant epidemiological and risk factors linked to the occurrence and spread of the disease and of the M. bovis bacteria strains to be found in the area studied.

Musso Munyeme defended his doctoral thesis on 12th December 2011 at The Norwegian School of Veterinary Science. The thesis is entitled: “Epidemiological investigations of zoonotic tuberculosis in the livestock/wildlife interface areas of the Kafue Basin in Zambia.”

Musso Munyeme was born in Choma, Zambia in 1973. He qualified as a veterinary surgeon at the Samora Machel School of Veterinary Medicine, University of Zambia, in 1999. He subsequently took a master degree at the same university before being awarded a NUFU-grant in 2007, which enabled him to study for a doctorate at The Norwegian School of Veterinary Science.