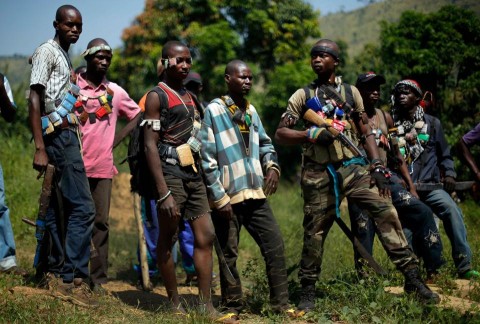 The Christian militiamen fighting to oust Central African Republic’s Muslim president from power hide in the hills far on the edge of the capital. Out of the forest of banana trees, about two dozen young men slowly emerge to meet their visitors — armed with clubs, machetes and hunting rifles.

These 20- and 30-somethings don’t look much different from the young men who sell air time for mobile phones in town, apart from their weapons and the spiritual protection they wear. On top of their soccer jerseys and t-shirts, they sport long rope necklaces with leather pieces and charms known as gri-gri that they say will save them from the bullets and machetes of their enemy.

As ragtag as they may appear, they pose the greatest threat to the Muslim ex-rebels now ruling the country since they seized power in the majority Christian country nearly nine months ago. And in interviews with The Associated Press, both the militiamen and a former officer in the national army before the March 2013 coup confirmed they are working together to topple rebel leader-turned-President Michel Djotodia.

“We are revolting so that Djotodia and his fighters leave, and the country can live in peace,” said Richard Bejouane, 27, who used to harvest manioc root and peanuts before taking up arms against the rebels known as Seleka earlier this year.

Though the militia movement’s hierarchy is unclear and there are divisions in its leadership, the collaboration is evidence that the opposition movement to Djotodia and his fighters is growing, and could set the stage for a protracted sectarian conflict even as 1,600 French troops on the ground in Bangui try to secure the peace. French forces are supposed to be disarming Muslim and Christian fighters, though the Christian militia hideouts in the bush have made them harder to find.

Central African Republic’s Muslims and Christians had lived together in relative harmony until the northern rebels backed by mercenary fighters from neighboring Sudan and Chad overtook the capital in March. Christians felt the rebels — particularly the foreign fighters — had targeted them in indiscriminate attack, fueling the resentment that has given rise to an armed movement.

In a show of force, Christian militiamen stormed the capital on Dec. 5, after hiding in a cemetery on the edge of town to launch their assault. Ultimately Djotodia’s forces pushed them back into bush, and in the violent aftermath more than 600 people were killed in just over a week as Christians and Muslims battled each other on the streets. More than a quarter of the capital’s population has fled their homes in fear.

The Christian militiamen are known here as the anti-balaka, or “those against the machete” in the local Sango language. For months they have been living in the remote bush, surviving on weeds and handouts from local villages, venturing out of the forest only to buy cigarettes and phone credit. The AP made contact with anti-balaka militiamen through an intermediary, who brought the journalists to the clearing to meet them.

The anti-balaka’s power base is in and around Bossangoa, the hometown of Francois Bozize, the ousted president. As the movement has grown in strength and numbers, it set its sight on Bangui, the seat of government in the south of the country.

Douze Puissance says he joined the forces of anti-balaka after the Seleka forces attacked his home in April and destroyed his life. His wife and two children — 8-year-old daughter Ornela and 10-year-old son Josias — were burned alive, he says.

“We want the French to force Djotodia out of office, but if not we will do it with our machetes,” he says. “We are farmers. We don’t generally get involved in politics. But he sent his men to our villages to kill our families and chase us into the forest.”