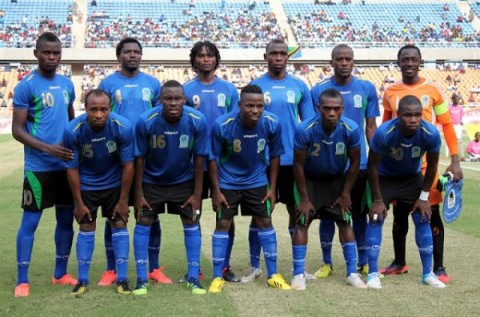 ZAMBIA yesterday opened the 2013 GOtv Council for East and Central Africa Football Association (CECAFA) Senior Challenge Cup campaign with a tough draw against Tanzania on a muddy pitch at Kenyatta Stadium in Machakos.
Seeking a positive start to the CECAFA Senior Challenge Cup in Kenya, Zambia took a deserved lead on 41 minutes through 2013 MTN Premier Division League top scorer, Reynolds ‘Sate Sate’ Kampamba.
Kampamba, who rattled the net 18 times for league champions Nkana in this year, repaid coach Patrice Beaumelle’s confidence in him with a sublime header that proved too much for Tanzania goalkeeper, Ivo Mapunda.
The Nkana talisman rose high to knock into the near-post a Felix Katongo inviting cross. Katongo, who was unmarked on the left flank, controlled a Kondwani Mtonga searching ball before setting up Kampamba to finish with aplomb.
Skipper Bronson Chama almost grabbed the second for Zambia a minute into first half stoppage time but his ferocious shot outside the box was stopped on the line by Mapunda.
Tanzania managed to reorganise after the break and restored parity three minutes after restart through Said Hussain Moradi.
Moradi powered home a header past debutant, Toaster Nsabata who was manning the Chipolopolo goal posts ahead of seasoned Joshua Titima.
Both teams tried but in vain to find the winner on the pitch which could pass for a swampy grazing ground.
Earlier, the soggy pitch made it difficult for both the Chipolopolo and Taifa Stars to string up some decent passes but it was Festus Mbewe, who almost broke the deadlock on 17 minutes, when he missed a sitter.
Mbewe skied a a seemingly easy ball from another Katongo delivery.
Taifa Stars’ Mrisho Ngasa also could have given his team a lead in the 23rd minute but opted to shoot wildly in a one-on-one situation with Nsabata, who accounted for himself well on his first day in office for the Chipolopolo.
Mbewe was guilty again of failing to put away a Kampamba pass on 32 minutes.
Beaumelle, who is still searching for his first win since taking over the Zambia job from French compatriot, Herve Renard, said the Chipolopolo needed to work on its mistakes before facing Burundi in the next game on Sunday.
He said the CECAFA Senior Challenge Cup was a tough tournament but that Zambia just needed to beat Burundi, who earlier were 2-0 victors over Somalia, to stand a chance of progressing.
Beaumelle said the Chipolopolo played well in the first half but that the Kenyatta Stadium pitch was tormenting to the players.
‘‘The first half was good for us and we scored. The pitch was very tormenting. Now we have to work on our mistakes before going into the next match. We’re looking forward to the second match against Burundi. The CECAFA Cup is always tough,’’ he said.
Tanzania coach, Kim Poulsen was equally pleased with the result, saying Zambia was a strong team.
Poulsen’s charges beat Zambia 1-0 in a friendly match in December last year in Dar-es-Salaam.
Zambia has not won an international match since August 3 when the developmental squad beat Botswana 2-0 in an African Nations Championship (CHAN) qualifier in Ndola.
The Chipolopolo will next face Burundi on Sunday before wrapping up the Group B campaign against Somalia on December 4.
Zambia line-up against Tanzania: Toaster Nsabata, Jimmy Chisenga (Kabaso Chongo), Christopher Munthali, Bronson Chama, Rodrick Kabwe, Kondwani Mtonga, Sydney Kalume, Felix Katongo (Salulani Phiri), Stanley Nshimbi (Alex Ng’onga), Festus Mbewe, Ronald Kampamba.