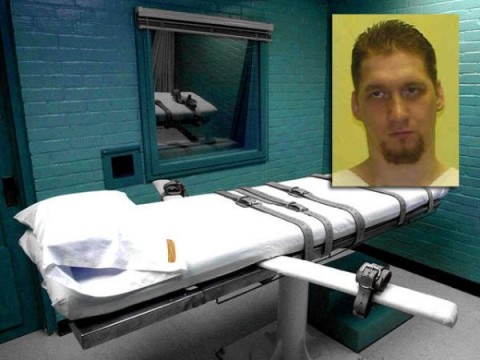 Ohio’s governor delayed the execution of a condemned child killer to consider the inmate’s unprecedented organ donation request, acknowledging that it’s “uncharted territory” but expressing hope that the man might help save a life before losing his own.

Ronald Phillips, 40, was scheduled to be put to death Thursday with a lethal injection of a two-drug combination not yet tried in the U.S., but Gov. John Kasich issued a stay of execution Wednesday. The execution date has been rescheduled for July 2.

“I realize this is a bit of uncharted territory for Ohio, but if another life can be saved by his willingness to donate his organs and tissues then we should allow for that to happen,” Kasich said in a statement. He said he wanted to allow time for medical experts to study whether Phillips could donate non-vital organs, such as a kidney, before being executed.

Phillips, who was sentenced for raping and killing his girlfriend’s 3-year-old girl in Akron in 1993, asked this week to donate a kidney to his mother and his heart to his sister. His attorney said it was an attempt to do good, not a delay tactic.

Kasich said Phillips’ crime was heinous but his willingness to donate organs and tissue could save another life and the state should try to accommodate that.

Some 3,500 people in Ohio and more than 120,000 nationally are awaiting organ donations, said Marilyn Pongonis, a spokeswoman for the Lifeline of Ohio organ donation program.

If Phillips is a viable donor for his mother, who has kidney disease and is on dialysis, or for others awaiting live transplants of non-vital organs, the stay would allow time for those procedures to be performed, Kasich said.

Phillips’ sister suffers from a heart ailment and he also wants to donate his heart to her.

Richard Dieter, executive director of the Death Penalty Information Center, said a Delaware death row inmate was permitted in 1995 to donate a kidney to his mother while in prison, though he was not facing imminent execution like Phillips.

“This step by the governor puts it into a more normal discussion of (how) an inmate, without any security problems, can help save another person and is that the right thing to do,” he said. “With 24 hours to go before an operation had to be carried out, it definitely gets in the way of that process.”

Vital organ donations raise larger ethical issues and have not been allowed during U.S. executions but have occurred in China, Deiter said.

Dieter, whose group opposes the death penalty, added: “If the whole idea is to save a life, there’s one life to be saved simply by not executing the person at all.”