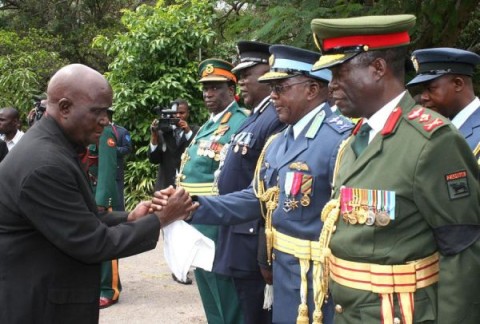 Tweet
A LUSAKA magistrate’s court has ruled that it samples in chambers the evidence that former Zambia Air Force (ZAF) commander Andrew Sakala had declined to adduce in an open court claiming that it borders on national security.

Principal resident magistrate Wilfred Muma yesterday said the sampling of the piece of information in chambers would enable him determine whether the evidence legitimately had the status of a State secret.
This is in a matter in which Sakala, 60, is jointly charged with former Zambia National Service (ZNS) commandant Anthony Yeta, also 60 and Zambia Army’s Wisdom Lopa, 59 for corruption involving K1.5 million meant for security wings’ operations during the 2011 general elections.
But Sakala, who along with Yeta and Lopa, have been put on their defence, had said he was under oath and could not disclose any classified information relating to the use of the money and would only do so if he was authorised by the President.
Mr Muma said the openness of judicial proceedings was enshrined in fundamental principles which must not be abrogated without proper justifiable grounds.
He, however, said that it was proper in the circumstances to determine whether the matter should be heard in chambers or open court after sampling the piece of information.
At this point, Sakala, through his defence lawyer Nganga Yalenga of Yalenga and Company, informed the court that even after making such a ruling, he would not divulge in detail the evidence but would only tell the court the general description of the information.
But Mr Muma reprimanded Sakala not to promote anarchy in court by giving instructions or advising the court when it had already ruled on the matter.
Mr Muma told Sakala that he had no right to give instructions to the court because it was not his “show.”