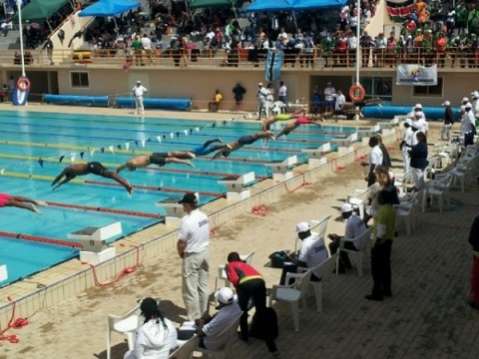 Tweet
THE Zambia Amateur Swimming Union (ZASU) is appealing for K200,000 to meet the K600,000 target needed to host the African Junior Swimming Championships (AJSC) to be held in Lusaka from November 28 to December 1.

AJSC local organising committee chairman, Guy Phiri, who is also ZASU vice president, made the appeal at a Press briefing at Lusaka Hotel yesterday.
Phiri said the event which was initially scheduled for Egypt, but was shifted to Zambia due to security reasons in that country said, he expected close to 20 countries to be in attendance and that each would be made up of 12 swimmers.
He said K400,000 has so far been raised through financial contributions from the Sports Council of Zambia (SCZ), the Ministry of Youth and Sport who would help with logistics as well as donations from some corporate entities.
“This event was shifted to Zambia at short notice, hence the ministry did not budget for it but through the Director of Sports, the Government has offered to help with air tickets for the officials, transport for officials and athletes during the event as well as accommodation for the officials and the athletes,” Phiri said.
Phiri said the International Swimming Federation (FINA) picked on Zambia to host the event because of the worldclass sporting facilities and the country’s ability to successfully host such events based on the Zone Six Games last year.
“Coupled with the commitment by the country’s Ministry of Sports towards the support of such events, FINA saw it fit that the event be moved to Zambia were it is confident that the championships will be a success,” he said.
Phiri has since appealed to the corporate world to help his association raise the remaining K200, 000 for a successful championship.
He said the best swimming countries were expected to participate in the championships among them South Africa, Botswana, Mozambique, Malawi, Zimbabwe and others.
Meanwhile, the ZASU vice president has said Zambia would assemble the best team for the event to make sure that the country reaped gold medals at the event.
He said the swimmers, some who were based outside the country, would be required to be in camp at least a week before the start of the event so that their progress could be monitored.
Phiri said the union was in touch with the coaches who were in charge of the swimmers mostly those who were based in South Africa and had received reports that they were doing well.
And SCZ development officer in charge of associations, Milfred Muke said the Council was happy with ZASU’s success and would continue to work closely with it to ensure the development of swimmers in the country was attained.