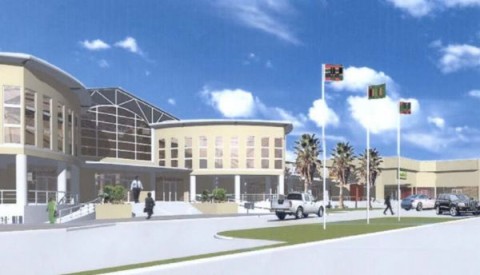 Tweet
CONFUSION has erupted between Ndeke residents in Ndola and a developer constructing a shopping mall as members of the community want a police post to be built on the piece of land and not a shopping mall.

The residents say they would rather have a police post constructed on the piece of land because they want the permanent presence of police to curb crime in the area.
This confusion has prompted Bwana Mkubwa member of Parliament Emmanuel Chenda to halt the construction of a shopping mall until the stand-off on the matter is resolved.
Mr Chenda, who is also Minister of Commerce, Trade and Industry, halted the construction of a shopping mall on Saturday when he visited the area.
Mr Chenda said the land where a shopping mall was being built was given to the residents by the council for construction of a police post.
He also wondered how the council could allocate the same piece of land to two developers.
“When I was asking for this land from the council for construction of a police post, I was in the company of four directors from the Ndola City Council.
“They should have told me that the land had already been given to someone else. There is no way the council can approve two projects at a goal, it is unacceptable,” Mr Chenda said.
Mr Chenda has since directed the Ndola City Council to resolve the impasse between Ndeke resident and the developer as soon as possible.
He said it is important that the laws of the land are adhered to in as much as Government encourages development.
And Sam Chiti, the developer of the land, told Mr Chenda that he was given the title to the land in 2011 by the Ndola City Council.
Meanwhile, Mr Chenda has assured Mackenzie residents in Ndola that Government will ensure that the township is developed by providing social amenities for the residents.
He said during a meeting with the residents on Saturday that he will soon embark on the upgrading of the main road in Mackenzie and ensure there is electricity in the township using the Constituency Development Funds.
Mr Chenda also urged women and youths in the area to form entrepreneurship groups for them to access funds from the Ministry of Youth and Sport and Ministry of Gender and Child Development.