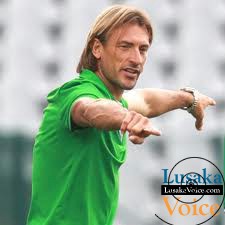 COACH Herve Renard has said qualifying to the Orange 2014 African Nations Championship finals is a must for the team despite Zambia drawing 1-1 with Botswana in the first round first leg tie here at the weekend.
Renard said the team needed to work hard and secure qualification to the final stage of the CHAN qualifiers this weekend in the return leg to be played at the Levy Mwanawasa Stadium in Ndola.
He said the Chipolopolo developmental squad had learnt from the mistakes made in the first leg at Molepolole Sports Complex where a poor defensive human wall cost the team victory.
Renard said goalkeeper Danny Munyau poorly arranged the human wall resulting into Botswana equalising to snatch a draw but he, however, said a draw was a good result for the team considering that they were reduced to 10 men after striker Alex Ng’onga was sent off.
The Frenchman saluted his charges for standing up to the challenge despite being a man down, saying they showed a lot of good fighting spirit.
“Now we will prepare for the return leg and get the qualification,” Renard said in an interview, adding that with a lot of concentration and determination including massive home support, the squad could knock out the Zebras.
Botswana coach, Stanley Tsoshane predicted a tough return leg especially that Zambia enjoys good home support from the fans.
Tsoshane regretted that his charges could only manage a draw against the 2013 COSAFA Senior Challenge Cup champions at home, saying the intention was to maximise home ground advantage in the first leg.
“Our intention was to use good advantage of the home ground. Now it won’t be easy in Zambia with the massive home support. Those fans in Zambia gave us a lot of support during the COSAFA but now they will turn against us,” he said.
The underfire coach said the Zebras now just needed to prepare adequately for the return leg and hope to shock Zambia at Levy Mwanawasa Stadium this weekend.
And Zambia’s High Commissioner to Botswana, Robert Mataka said the draw was a good result for the team and wished them the best in the return leg.
“To get a draw away is a big achievement for the team because Botswana are a tough team. The boys are young and coming up well. We have a good team. This will be a formidable team for the future and I wish you the best,” Mataka said when he addressed the players during a dinner he hosted for the team in Gaborone on Saturday night.
Team delegation leader, Kelvin Mutafu said the team was grateful for the good reception accorded as the squad felt at home and thanked Zambians leaving here for the massive support rendered to the team during the match.
Mtafu, who is FAZ treasurer, assured that the squad would kill off the fixture in Ndola and qualify to the next stage.
The winner between Zambia and Botswana will face either Zimbabwe or Mauritius in the final qualifying series for a place at the 2014 CHAN finals in South Africa.