A monstrous tornado as much as a mile wide roared through the Oklahoma City suburbs Monday, flattening entire neighborhoods with winds up to 200 mph, setting buildings on fire and landing a direct blow on an elementary school.

There were no confirmed injuries or deaths, but the storm laid waste to scores of buildings in Moore, south of the city. Block after block of the community lay in ruins, with heaps of debris piled up where homes used to be. Cars and trucks were left crumpled on the roadside.

The National Weather Service issued an initial finding that the tornado was an EF-4 on the enhanced Fujita scale, the second most-powerful type of twister.

In video of the storm, the dark funnel cloud could be seen marching slowly across the green landscape. As it churned through the community, the twister scattered shards of wood, pieces of insulation, awnings, shingles and glass all over the streets.

Volunteers and first responders raced to search the debris for survivors. 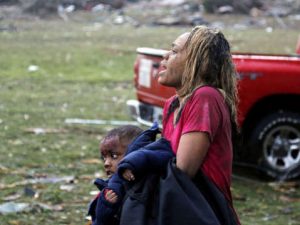 At Plaza Towers Elementary School, the storm tore off the roof, knocked down walls and turned the playground into a mass of twisted plastic and metal.

Several children were pulled alive from the rubble. Rescue workers passed the survivors down a human chain to a triage center in the parking lot.

James Rushing, who lives across the street from the school, heard reports of the approaching tornado and ran to the school, where his 5-year-old foster son, Aiden, attends classes. Rushing believed he would be safer there.

“About two minutes after I got there, the school started coming apart,” he said.

The students were placed in the restroom.

“There’s no safe room in the school. There will be,” said Rushing, who said his home was virtually destroyed.

MORE ON  Children Pulled from Rubble After Massive Oklahoma Tornado