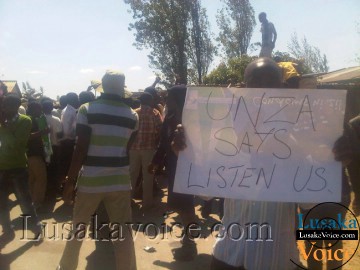 UNIVERSITY of Zambia students have stormed Mass media complex ZNBC studios over the removal of fuel and maize subsidies.
The students who started their protests last evening when they stormed Muvi TV studios to air their grievances this morning assembled and
matched to ZNBC studios to publicly denounce the PF government’s intention to remove the critical subsidies on the economy that has immediately pushed the prices of all commodities upward.
So far several police Land Cruiser vehicles have been spotted heading to mass media, Kalingalinga, and UNZA Great East Campus to control the situation.
The students have complained that the cost of living in Zambia under the PF government is sky-rocketing at a very fast rate.
Breaking story more details later…