Growing opposition to UNIP’s monopoly on power, due in part to economic problems and corruption, led to the formation of the MMD in July 1990, led by Dr Akashambatwa Lewanika, Arthur Wina, Sikota Wina and Frederick Chiluba the head of the country’s trade unions.

The First ever multi-party general elections since the introduction of a one party state in the early 70s were held on 31 October 1991, and saw the MMD sweep to power in a massive landslide win. Chiluba was elected President of Zambia becoming the 2nd Republican President with 76% win of the vote to Kaunda’s 24%, whilst in Parliament the MMD won 125 of the 150 elected seats.

Before his party’s convention in 1990, Mwanawasa was widely tipped to become the President of the MMD, but he declined the overture, citing his young age and inexperience. After Frederick Chiluba was elected as President, he appointed Mwanawasa as Vice-President in December 1991.

Mwanawasa served as Vice-President until he resigned in 1994. In 1996 he unsuccessfully contested against Chiluba for the presidency but lost. After the loss, Mwanawasa retired from politics until the 2001 election.

In August 2001, the National Executive Committee of MMD elected Mwanawasa as its presidential candidate for the 2001 election. He won the election, held on 27 December 2001.

Mwanawasa ran for a second term in the presidential election held on 28 September 2006. Michael Sata of the Patriotic Front was considered his main challenger.

His re-election was confirmed on 2 October; according to official results, he received 42.98% of the vote. He was sworn in for another term on 3 October. A few days later, he named a new cabinet and appointed Rupiah Banda as Vice-President.

Mwanawasa did not complete his second term in office due to poor health leading to his demise on 19 August, 2008.

Presidential elections were held in Zambia on 30 October 2008 following the death of Mr. Mwanawasa as the elections had to be called within 90 days of his death.

It was expected that there would be internal problems within the ruling MMD as Mwanawasa had not declared a successor prior to his death, but Acting President Rupiah Banda was selected as the MMD’s candidate without apparent problems after beating the likes of Ng’andu Magande who was among the contestants.

In 2011 as per tradition and Party constitutional demand the MMD went on to hold its general convention in kabwe that saw Republican President Rupiah Banda elected for a 5 year term as president of the party and MMD presidential candidate for the 2011 general elections, unfortunately MMD Presidential candidate Rupiah Banda lost that election to PF Presidential candidate Michael Sata, After the MMD lost the 2011 elections to the PF, Rupiah Banda relinquished his position as MMD President and went into retirement leading to the party holding an extraordinary convention to elect “a leader” that will complete the 5 year mandate started in 2011 by RB, this extraordinary convention saw the likes of former finance minister in the MMD government Hon Situmbeko Musokotwane, Hon Felix Mutati and Nevers Mumba go head to head for the position of party President, Nevers Mumba emerged victorious against his closest rival Felix Mutati, a defeat Mutati graciously accepted but this was the beginning of what is referred to in the MMD circles as the death of democracy and the birth of tyranny as those that did not support Nevers Mumba or had views that where different to his were either suspended or expelled and those seen to be loyal to the new party President rewarded with positions.

Dr. Mumba continued going against the party constitution by appointing members who were loyal to him in order to consolidate his grip on power but it was just before the 2016 elections that the situation changed as even those he appointed to positions of power saw the need to save the party from tyranny and unconstitutional leadership, Hon Mwansa Mbulakulima who was appointed by Nevers Mumba as Party National Secretary, Mr Raphael Nakachinda who was appointed as Party Spokesperson braved the possibility of expulsion and physical attacks from Nevers Mumba’s minions and stood on the side of the truth together with those who were slapped with what they termed as illegal suspensions and expulsions then demanded that a convention be held as the five-year mandate given to Dr. Mumba was nearing its expiry.

This was followed by tedious court processes characterized by injunctions and counter injunctions and at one point Nevers waving Plain papers to the media lying that he had obtained an injunction against Mutati and those calling for a convention, a stunt that later came back to bite Nevers as the media now knew what type of clothe he was made from but after all the infighting and court documents, a convention was successfully held which ushered in Hon. Mutati as Party President but this did not end the legal battles which have continued to-date now over the legality of the convention as well as legitimacy of those elected.

However, from a moral aspect, one only needs to wind back on Dr. Mumba’s past to understand why this confusion in the MMD has continued.

Dr. Mumba did not start his public life as a politician, He started out as an evangelist who took the religious platform in Zambia by storm becoming the first tele-evangelist in the country and for close to two decades pulled huge crowds, preaching with eloquence, a message of hope and dignity through Christ under a theme message of “Zambia shall be Saved”.

However, because of his fame a growing desire for power grew in him, Dr. Mumba, in 1997 while away in Windhoek Namibia, announced that he had formed an organization called The National Christian Coalition (NCC) to push for political reforms in Zambia and that the NCC was going to take on President Chiluba’s government head on.

Realising that Mumba’s society was a political front and not a church organization, Chiluba’s government was unleashed on the NCC’s status as a society forcing its leader to quickly transform it into a political party and renamed it the National Citizens Coalition (NCC).

His abandonment of the pulpit in preference to politics dwindled his fortunes as many of his followers felt betrayed as they remembered a time he assured them that he would not join politics as joining politics would be a demotion to his purpose and call from God, this drastically marked the downfall of the good name he had built for himself. His followers started doubting him and soon, even his financial status suffered.

Two years after Mwanawasa came into power in 2003, he gave Dr. Mumba a man that challenged his election a second chance to reorganize himself by appointing him as Republican vice President. As a matter of fact, Dr. Mumba dissolved his NCC 24 hours before to facilitate for that appointment, again betraying people that believed in him, this time his political followers and other NCC party leaders.

However, he hardly lasted a year as vice president as he was fired in 2004 due to his unbridled abuse of power resulting from his visible pride and arrogance.

When RB came into power, he, just like his predecessor Mwanawasa had done, extended an olive branch to Dr. Mumba by appointing him as ambassador to Canada but was recalled during Michael Sata’s regime following the Barrick Gold Co-operation scandal in which he was accused of pocketing huge sums of money meant for the Canada-Zambia exchange show a case that is stil in court to now.

With this history, the MMD has demonstrated all through the ages that it was founded on strong democratic principles which are not only enshrined in its constitution but evident in its intra-party democracy in which the party has had a peaceful transfer of leadership every after five years.

It is true to say Dr. Mumba today is the ghost that is haunting the MMD because of his puffed up ego of national leadership while playing dictatorial tendencies to shut up dissenting voices and paralyze his perceived competitors within the rank and file of the party.

No wonder he found solace in going to bed with another dictatorship, the UPND, in the previous election because birds of the same feather truly flock together! Had it not been for Dr. Mumba, the MMD would not have been as divided as it is today and would probably have been the second largest opposition political party because it is the only party with a true national character with representation in all corners of the country from section to provincial level.

From 1990 to-date, it is only during the reign of Dr. Mumba that the party failed to observe intra-party democracy. Two years in office as Party President Hon Felix Mutati has already started holding Provincial Conferences to have the members of he party elect their leaders as per MMD tradition and constitutional demand, something that was last seen before Nevers Mumba became President.

We challenge Nevers Mumba to tell us who in his National Executive Committee was elected by Party Members, when and where was the said convention held to elect them and when does their mandate end.

To the MMD faithful, the elephant is already in the house and it will take decisive and drastic measures to remove it without breaking your property. 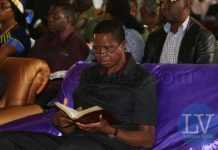