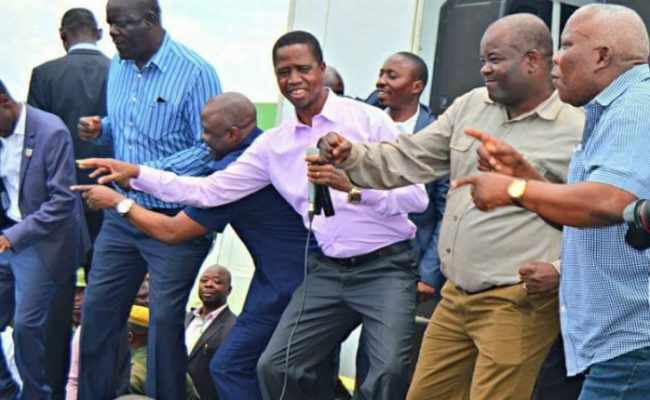 •In 1996, Stood as Independent against the mighty MMD Vice President General Christon Tembo, but lost.
•In 1998, Joined UPND under Card 60 as Founding Member.
•In 2001, He quit UPND to Join Forces with Sata establish PF , because in UPND Tribalism and Bitterness had engulfed the young leadership of UPND (Tonga Hegemony against Bemba Hegemony).
•In 2001, Edgar Lungu became among the first PF members who never abandoned Mr. Sata, he helped Mr. Sata register the PF party with the Registrar of societies among the likes of Dr. Chishimba and Edwin Lifwekelo
•and 2001 Edgar was the first Late Sata’s PF Lawyer.
•In 2006, Edgar Lungu was left out on PF parliamentary adoptions Rev. B. Sampa was chosen, but he remained with the party and vigorously campaigned for it.
•In 2011, with the support of PF Youths and women who had worked with Mr. Lungu on many developmental projects in Chawama Constituency Managed to convince the District, the Province, The Central Committee eventually his Excellency late President Sata that Mr Edgar Chagwa Lungu was the right man for the constituency, and the late President Mr. Sata picked him to contest the Chawama seat and subsequently won the seat. This was the same year the PF party was ushered into power.

•In 2012, Mr Lungu was appointed as deputy minister by late president, Michael Sata to assist Guy Scott in the office of the Vice-president.
•In the same year 2012, Mr Lungu performed beyond Mr sata’s expectations, and Guy Scott been used at the time by God recommended to Mr. Sata that Mr. Edgar Chagwa Lungu was an exceptional Lawyer, he had an exceptional brain, extremely intelligent and hard working, basing on this recommendation he was appointed Minister of home affairs. He brought sanity to the Police Service and Immigration department, through his rank and file approach to work.
•In 2014, Mr Lungu was appointed as Justice Minster after Mr Sata saw that the judicial system in the country broke down due to incompetence exhibited by Mr Kabimba who was then operating under the directives of the infamous Cartel.
•In 2014, despite holding the justice ministerial office, Mr Lungu was appointed as defense minister and PF secretary General. He brought sanity in these positions being a humble man but tough in character.
•In the same year 2014, Mr. Sata consistently left Mr. Lungu to act as President whenever he went out on foreign trips, this was a clear indication that the President had favored Mr. Lungu as next of King though in Zambia you have to go through an election at both Party level and Republican level, the only time that this was breached was when the Cartel through George Cheelah Made Wynter Kabimba to act, and those 21 days will for ever go into the history of this country as the Dark Cartel Acting Days, This Wynter experience alerted our Late President to notice how close the whims of the cartels were to usurp state elected power, such that even before he went to the UK where he passed on, Mr Sata recalled Edgar Lungu from Angola where he had gone on a ministerial work visit, to come back and act as President in his absence. Mr Sata couldn’t trust anyone else than other Mr Lungu. Mr sata left him with the instruments of Power which Guy Scott grabbed from him after Mr Sata died in the UK.

• in the the Same year, regardless of the Guy Scott – Miles Sampa Cartel sponsored internal wrangles in the PF, Mr Lungu won the Party Presidency and subsequently contested Presidential by-election.
•In 2015, Mr Lungu only had 21 Days to campaign unlike his opponent HH who campaigned for 3 months. Regardless of the challenges he faced along the way, Edgar Lungu won the 2015 presidential by-election beating his main rival Hakainde Hichilema.
•In 2015, as President of Zambia the Man had Proved any reasonable doubt that he was a true humble Leader, destined to rule Zambia , as he followed all the Projects of the Late Sata, He signed a New Constitution and for the First time A Concourt was in put in place.
•In 2016, he contested the presidential elections and emerged winner, beating the 2015 runner-up Mr Hichilema.
Looking at Mr Lungu’s political career there’s no doubt that he was destined to rule and he deserves our full support.