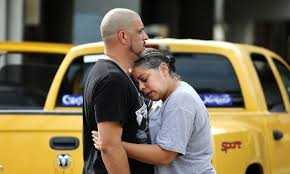 A gay nightclub here was the scene early Sunday of the worst terror attack in U.S. history since 9/11.

* 50 people were killed inside the Pulse club and at least 53 people were injured, police say.
* The gunman was Omar Mateen of Ft. Pierce, Florida, a law enforcement source told CNN.
* Orlando police shot and killed Mateen.
“It appears he was organized and well-prepared,” Orlando Police Chief John Mina said early Sunday. The shooter had an assault-type weapon, a handgun and “some type of (other) device on him.”
There has been no claim of responsibility for the attack on jihadi forums, but ISIS sympathizers have reacted by praising the attack on pro-Islamic State forums.
Officials, aided by the FBI, warned that a lengthy investigation was ahead given the number of victims and the scope of the violence.
CNN