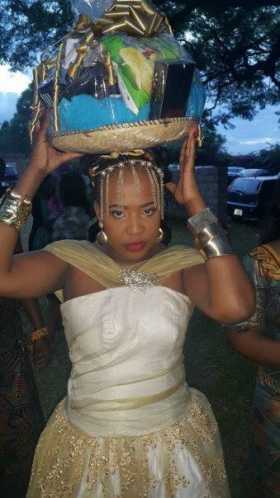 Mozambique based striker Lineker Mwikisa has joined the list of footballers hooking up with broadcast journalists after his kitchen party to ZNBC newscaster Mary Magambo. A kitchen party is a precursor to the a couple finally settling down together in matrimony.
The 28 year old on loan striker from Green Buffaloes to Costa Do Sol in the Mocambola League took his prolific acts off the pitch scooping what many view as ‘hot chick’ Magambo and the duo is set to tie the knot soon.
Mwikisa topped the scoring charts in Mozambique despite having joined his club in the second half of the season.
The former Mpumalanga Aces striker walks in the footsteps of fellow footballers Hichani Himoonde who is married to former Muvi Television journalist Charity Mtonga while another notable football star Felix Katongo hooked up with former television personality Mwaka Nakweti.
Top of the footballer/journalist union lay Football Association of Zambia president Kalusha Bwalya who was once involved with former ZNBC news anchor Maureen Nkandu. The duo have a child together