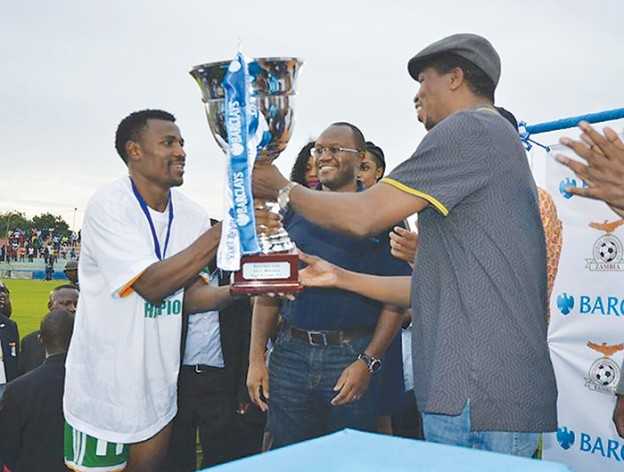 GREEN Buffaloes yesterday lifted the 2015 Barclays Cup courtesy of goals by defender Stephen Kabamba and former international Christopher Katongo that made the army side K350,000 richer.
Kabamba headed in the opener and the Africa Cup winning skipper Katongo wrapped up the day in front of President Lungu, who watched the action-packed match that brought the season to an end.
“It’s a fantastic win and a sweet victory.
“We really worked hard for it and it has covered for missing continental competitions next year.
“We are very happy and congratulations to the players for putting up a spirited fight,” Buffaloes coach Bilton Musonda said.
Katongo said: “I am happy I led Buffaloes to lift the cup. It is a major achievement for the club and it shows that I am still able to play to my level best.”

It was a game of two halves – Buffaloes controlled the first stanza while Nkwazi were on top in the second-half but lacked the scoring touch.
Nkwazi started the match with a bang with pacey winger Mwepya Kasongo leading the charge but the Buffaloes defence marshalled by international Buchizya Mfune was tight.
Buffaloes slowly came into the match with skipper Katongo, Sebastian Mwansa and Jackson Chirwa dictating proceedings in midfield.
Katongo found man-of-the-match Jasper Masialeti, who beat Michael Bwalya but his cross was blocked in the 17th minute.
A minute later, Buffaloes took the lead when Kabamba headed in a Mwansa corner.
Buffaloes goalkeeper Davy Kaumbwa stretched himself to stop Lottie Nyimbiri’s thunderbolt in the 25th minute.
The Zambia Army side sealed victory in the 33rd minute. Katongo and Mwansa combined before releasing the ball to Masialeti.
Goalkeeper Kalaba Makasa hacked Masialeti and referee Wisdom Chewe pointed to the spot and cautioned Makasa.
Katongo scored and celebrated with four flip-flops.
Katongo, who was in tip-top form, fed Mwansa and the former under-20 skipper’s cracker was parried for a corner by Makasa in the 40th minute.
On resumption, Nkwazi introduced Gift Lukwesa for Kasongo and the Zambia Police outfit controlled proceedings on a wet pitch.
Buffaloes coach Musonda introduced Friday Samu for Brian Mwila in the 54th minute but the Nkwazi defence remained resolute.
Kaumbwa was called to duty parrying Steward Chikandiwa’s long-range shot in the 59th minute and a minute later, Nkwazi coach Elijah Chikwanda introduced Emmanuel Kasonde for Nyimbiri.
With time ticking, Chikwanda withdrew his son, Kalaba, for Jeff Banda on 65 minutes.
Nkwazi skipper Musukuma Chipungu saw his grass-cutter from outside the box hitting the upright before rolling into play and Buffaloes cleared the danger in the 75th minute.
Buffaloes withdrew Masialeti for Lottie Phiri in the 76th minute.
The unmarked Chikandiwa headed wide on 79 minutes and, seven minutes later, Kasonde fired over the cross-bar with Kaumbwa to beat.
“We are disappointed but that is football.
“We really wanted to win the cup. We lost to a better team and we will try our luck next year,” Chikwanda said.
Nkwazi pocketed K150,000.