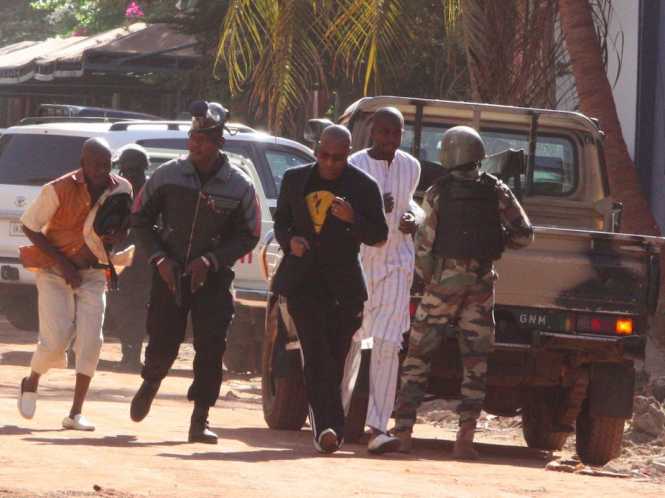 Malian special forces have entered the Radisson Blu Hotel in Mali’s capital, Bamako, to end a siege by gunmen. The hotel says 138 people remain inside.

The gunmen stormed the US-owned hotel, which is popular with foreign businesses and airline crews, shooting and shouting “God is great!” in Arabic.

Interior Minister Salif Traore said the soldiers’ lives were not in danger.
Mali: World’s most dangerous peacekeeping mission
The US Department of Defense told the BBC that US special forces were “currently assisting hostage recovery efforts”.

A US official said around 25 military personnel were in Bamako at the time of the attack and that some of them are helping “with moving civilians to secured locations, while Malian forces clear the hotel of hostile gunmen”.

The Radisson Blu hotel group has set up special phone lines for families who may have been affected. It says 125 guests and 13 staff are still in the building.

Air France says 12 of its crew have been successfully freed in the rescue operation; Turkish Airlines says five of its crew are out, but two remain in the hotel.

Map of Bamako
Twenty Indian nationals are in part of the hotel but are safe, according the Indian embassy in Mali, while Chinese state TV reported four of 10 Chinese citizens caught up in the attack had been rescued.

The UN peacekeeping force said it was supporting the operation as Malian special forces freed hostages “floor by floor”.

Media captionEye-witness Michael Skapoullis: “I saw bullets on the floor”
“We have sealed all the exit points of the hotel, so be assured none of the hostage takers will be able to escape,” the interior minister told reporters outside the Radisson Blu.

An Ivorian guest said she and six other people were escorted out by security forces as the gunmen rushed “toward the fifth or sixth floor”.

“I don’t know where to go. I’m tired and in a state of shock,” Monique Kouame Affoue Ekonde told the AP news agency.

Earlier, a security source told Reuters that some hostages who were able to recite verses of the Koran were being freed.

Malian troops take up positions outside the Radisson Blu hotel in Bamako on 20 November 2015Image copyright AFP
Image caption Malian special forces have entered the hotel
In August, suspected Islamist gunmen killed 13 people, including five UN workers, during a hostage siege at a hotel in the central Malian town of Sevare.

France, the former colonial power in Mali, intervened in the country in January 2013 when al-Qaeda-linked militants threatened to march on Bamako after taking control of the north of the country.

His al-Qaeda-linked group was among those ousted from northern towns in 2013.

People run to flee from the Radisson Blu Hotel in Bamako, Mali, Friday 20 November 2015Image copyright AP
I spoke to a gardener at the hotel who was sweeping the yard when the gunmen arrived.

“They were in car with a diplomatic licence plate. They were masked. At the gate of the hotel, the guard stopped them and they start firing. We fled,” he said.

Another eyewitness said that it was difficult to say how many attackers there were, he said it could have between five and 13.

“They injured three security guards who were at the gate of the hotel,” he said.

Popular Guinean singer Sekouba Bambino was among some guests who has managed to get out of the hotel. It is not clear how he escaped.

He said: “I woke up with the sounds of gunshots and for me it sounded like small bandits. After 20 or 30 minutes, I realised these are not just petty criminals.”

Mali’s President Ibrahim Boubacar Keita has cut short a trip to a regional summit in Chad.

His French counterpart Francois Hollande said: “We should yet again stand firm and show our solidarity with a friendly country, Mali.”

Media captionFrench Foreign Minister Laurent Fabius: “We are taking all the necessary steps in order to solve that crisis”
The US embassy in Bamako tweeted that all US citizens were asked “to shelter in place” and were “encouraged to contact their families”.

Some reports say about 10 gunmen in total are involved in the attack.