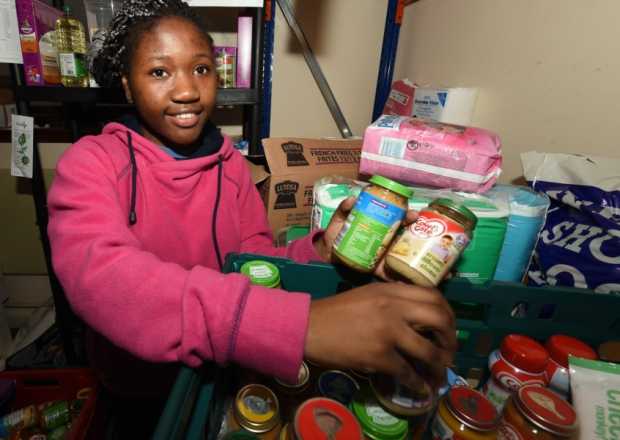 A TEENAGE exchange student visiting Scotland for the first time said she was shocked to find the nation had food banks.
Chishimbe Kondolo, a 17-year-old Zambian who was based at South Leith Parish Church, said she had thought Scotland was a rich country, the “land of milk and money”.

Ms Kondolo worked at the Edinburgh North East Food Bank in Henderson Street, Leith, during part of her three-month visit arranged through the Church of Scotland.

Describing her initial reaction, Ms Kondolo, from Kitwe, north of the Zambian capital of Lusaka, said: “It came as a huge shock to me, finding people who couldn’t afford to buy their food and support themselves.

“Before I arrived here I was bragging to my friends I was going to the UK and had a view of what it would be like.

“But the experience at seeing food banks made me start questioning things.

“What people earn here seems so much to me compared with Zambia but then I found out that even if they are working hard or looking for work there are circumstances beyond their control which puts them in this situation.

“There were lots of people with different problems, and sometimes from different countries, using the food bank. Some told me of the difficulties in their lives.

“Mostly this was through losing their jobs, and some were struggling with drugs or alcohol problems. The scale of the problem was a shock.”

Ms Kondolo, who also spent a week at Leith Academy, will be starting a university journalism course on her return home.

Latest figures from the Trussell Trust reveal that in the 2014-15 financial year, 117,689 people, including 36,114 children in Scotland, received food. This was a 65 per cent increase on the previous year. In Edinburgh 9567 adults and 4315 children received help.

Rev Iain May, of South Leith Parish Church, said: “Chishimbe had initially looked at things from a Third World perspective where £100 a week is a large amount of money.

“But I explained to her about living costs here, zero-hours contracts, welfare cuts and how people can face choices of paying the rent or feeding their kids.”

Ewan Gurr, Scotland network manager for the Trussell Trust, said: “Since setting up our first food bank in 2000, we have experienced an economic downturn, rising food and fuel costs, an increase in insecure employment and the impact of welfare reform plunging people into a form of crisis that has, in some extreme cases, led to starvation and malnutrition.

“It is circumstances as disturbing as these that stun those among our volunteers who come from developing nations where there can be a perception about the life we lead and that perception, simply, is not always true.”