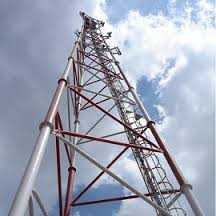 A discharged Zambia Army Soldier has climbed a telecommunication tower in Lusaka’s Woodlands residential area opposite Arakan Military Barracks threatening to jump to his death, if he is not paid his terminal benefits.

The man, who has only been identified as Katukula, also claims to have been unfairly discharged from the army.

Katukula, had been deployed to Kasama, Northern province at the time of his discharge.

The man has explained to TV 2′s Delphister Lungu that he was dismissed after he was implicated in an alleged criminal activity.

The man climbed the tower this morning around 7 hours, and by broadcast time, he was still at the top of the mast.

The man, who has shouting from the top of the tower, as he communicated with people on the ground, is claiming that he knows about a lot of irregularities and unfair tendecies in the army, which he wants to tell President Edgar Lungu.

Meanwhile, Zambia Army Commander, Paul Mihova and some senior army officers, including military police, have camped at the tower, trying to persuade Katukula to get down.

The Lusaka Fire bridge is also at the scene.

And scores of residents of Woodlands, Chilenje and other surrounding areas have gathered at the tower to witness the unfolding event.