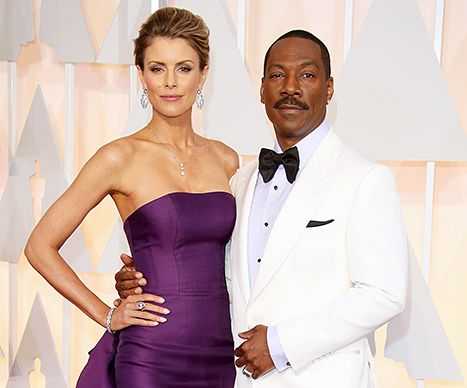 Lucky number nine? Eddie Murphy is going to be a dad again, the actor’s rep confirmed to Us Weekly. The baby will be the comedian’s first with girlfriend Paige Butcher, and his ninth overall.
Murphy, 54, and Butcher, 36, who have been dating for four years, will welcome their bundle of joy in May 2016.
The Beverly Hills Cop actor is already a father to Eric, 26, with Paulette McNeely; Christian, 25, with Tamara Hood; and Bria, 25, Myles, 22, Shayne, 21, Zola, 15, and Bella, 13, with ex-wife Nicole Mitchell.

He and former Spice Girl Melanie “Mel B” Brown also share one daughter, 8-year-old Angel.
In 2013, Butcher opened up to Vanity Fair about her relationship with Murphy, though she tried to keep details as scant as possible.
“I’m in a relationship with a celebrity, so I felt like there’s already enough of me out there,” she told the magazine of why she chose to stay off social media.
“I felt like I was giving out too much information.
I was giving people too much access. I like to keep as much private as possible now.”
The Australian model has previously appeared in such films as Something’s Gotta Give and Big Momma’s House 2.
YAHOO NEWS