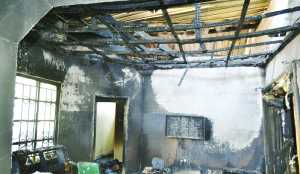 The inferno, which swept through four semi-detached flats in Ibex Hill on the Main Street off Kabulonga Road between 05:00 hours and 06:00 hours, reduced Janza’s goods to ashes.
An electrical shock is believed to have caused the fire after power was restored following load-shedding.
The Football Association of Zambia (FAZ) technical director’s house was among four flats that caught fire in the premises.

However, nobody was burnt in the inferno as fire-fighters managed to rescue the victims and salvaged a few items and documents.
Janza said he was saddened to lose property in a fire but thanked God that he escaped the inferno safely.

“I really don’t know what caused the fire because we had no power. I am sure the time power was restored there was an electrical shock. It was around 05:00-06:00 hours when we were fast asleep only to be awakened by our neighbours whose house also caught fire.
“The property lost is about K500,000 all so it is very sad but I am glad that we were rescued by the fire brigade,” the FAZ official said.