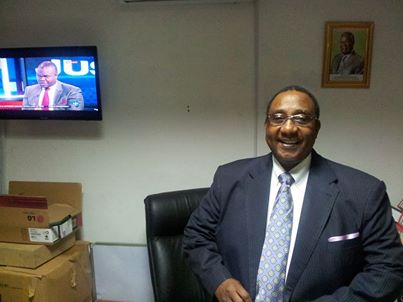 Acting as a court of law which interprets laws, Speaker of the National Assembly Patrick Matibini has ruled that Geoffrey Mwamba is no longer MP for Kasama.

It is actually the court which is supposed to say so not a speaker of parliament.
But Matibini sitting as judge and witness, said Bwalya Mwamba crossed the flow by accepting a position in the United Party for National Development (UPND).

And Matibini has ruled that the four UPND members serving in the PF government as Deputy Ministers did not cross the flow because the Republican President has the prerogative to appoint Ministers and Deputy Ministers from Parliament.
Dr Matibini said the late Ben Tetamashimba was deemed to have crossed the flow and lost his seat after he was appointed as Secretary General of the UPND.

Dr Matibini said it was his well considered view that by accepting the position of Vice President of the UPND became a member of the UPND. It is inconceivable that the UPND can appoint a committee member of the PF to be its vice president.
‘I therefore declare that in joining the UPND by becoming a vice president of the UPND, a party on which he was not elected crossed the flow and lost his seat. Accordingly I now declare that the Kasama Central seat is forthwith vacant,’ Dr Matibini ruled.

On Patrick Mucheleka who was alleged to have crossed the flow by attending a UPND press conference Matubini said:
‘I viewed the footage of the press briefing but Mucheleka did not make in comments suggesting that he joined the UPND. He could be viewed to have been a curious bystander. Mere supporting or campaigning for a political party is not conclusive to prove that such a member has crossed the flow. I rule that Mucheleka has not crossed the flow and therefore is a duly elected Member of Parliament for Lubansenshi.

On the four UPND Members of Parliament serving as Deputy Ministers in the PF Government namely Greyford Monde, Poniso Njeulu, Richwell Siamunene and Dawson Kafywaya, Dr Matibini has ruled that the four are in order to be in the House as the they did not cross the flow because the President is constitutionally allowed to appoint Ministers and Deputy Ministers from Parliament.