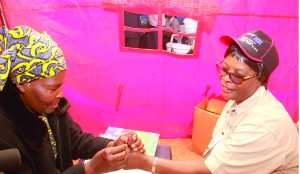 Ms Lungu said the Ministry of Health and that of Community Development, Mother and Child Health had initiated a mass campaign to increase the uptake of HIV counselling and testing services.
She said this in Lusaka during the commemoration of the International VCT Day which fell yesterday.

Counselling and Testing’ was an explicit reminder to everyone to ensure they tested for HIV/AIDS.
The VCT day provided a platform for increasing access to HIV testing services and an opportunity to increase access to information about prevention measures that included abstinence and consistent use of condoms.

She said the organisation of African First Ladies Against HIV acknowledged that AIDS killed about one million people in Africa each year.

“As I stated on the sidelines of the 25th session of the African Union Heads of State Summit in South Africa, in order to move forward, there is need for strong mobilisation of partners who are ready to match our resolve with significant resources,” the First Lady said.
Ms Lungu said current statistics indicated that about 78,000 adolescents in Zambia were living with HIV while testing among adolescents remained very low.

The President’s Emergency Plan for AIDS Relief (PEPFAR) country coordinator Kristie Mikus said the United States government had pumped in around US$500,000 annually in AIDS programmes.
PEPFAR had so far provided more than $2.5 billion in trying to combat HIV and AIDS in Zambia.