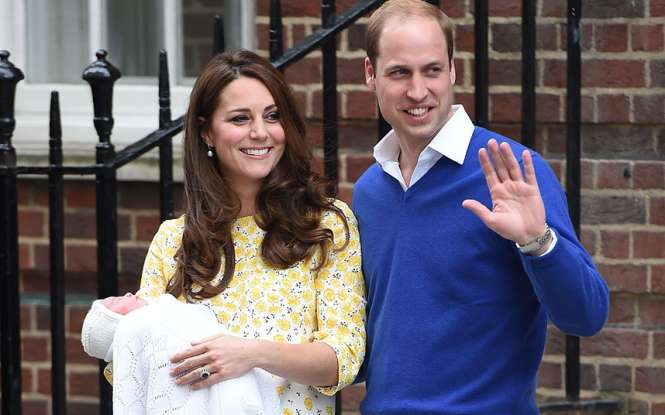 A Russian newspaper has claimed that the Royal Birth was actually a fake.

Conspiracy theorists have said that when the Duchess of Cambridge appeared from the Lindo wing with the new Princess she looked too beautiful to have just given birth.

Komsomolskaya Pravda quoted several Russian women who said it was impossible to look that good hours after giving birth.

Among the more bizarre theories, they suggest the baby was either born to another woman or she was born three days earlier.

One said: ‘She gave birth three days ago. They reported it only now. Look at the baby – she does not look like a newborn at all.

‘She is at least three days old. there is nothing which would help a woman, even if she gave brith with the help of the best doctors, stand up five hours after giving birth – and leave the clinic on her feet.’

One even criticised Kate for not having a maternal look in her eyes while another said the princess’s skin suggested she was over a week old already.

The woman who said a surrogate had given birth added: ‘Kate must have been wearing a fake belly showing to the people that she was pregnant.

‘It is just not real to walk yourself several hours after birth and wave to the public.’

Here’s what the British public think… and it seems as though British women are made of sterner stuff.-MetroUK