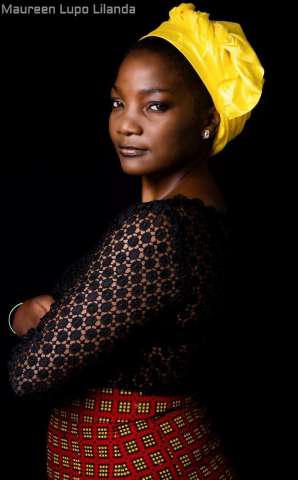 Zambia’s music icon, Maureen Lupo Lilanda opens up about her career and how her father thought she would end up as a prostitute. Despite being in the music industry for more than 20 years and receiving so many awards, Maureen told Lusaka Voice that she does not feel accomplished yet.

L.V How did you get into singing?

MLL I started singing in my early middle teens and of course it was against my parents’ will. In those days music was for failures and being a woman didn’t make it any easy. My father thought that maybe I would end up on drugs, being a prostitute and not getting married. This was a big secret in our family. My aspiration was to be a pilot or a nurse, simply because I wanted to travel and not to see anyone hurting.

However, I believe in the saying that God’s plan is the best. Through my music I have travelled extensively and do a lot of charity work. The passion to help and to travel has been fulfilled through music.

By the time I was finishing college, it was fully fleshed music and I could not hide it anymore. By then the media was also beginning to write about me. My father went ballistic on me but I had attained a Diploma in journalism and to his amusement it was with distinctions.

L.V How was the transition from girlhood to being a parent like?

MLL I was fortunate to marry a man who tolerated my music and was very encouraging. With my busy schedule, he was a partner that would stay with the children. He was very supportive but along the way after seven years of marriage, he passed on.

My children have been very good, the fact that I was not home all the time meant that they could have been wayward. However, my first child is a lawyer and the other one is studying at University. I give them credit, they have made my life as a single parent very easy.

MLL My first album was in 2000 called “Nandayeya” meaning reflections, I was reflecting on my life. It was just praise to God because being a female artist and single mother was not easy. In that album I was only singing in English and I was criticized for. I thought people were being jealousy until I had my first visit to the United States of America. I recall someone telling me that I sang very well but was not sounding Zambian. That was the first seed of doubt that was planted in my heard and the more I travelled, the more this was getting louder.

People were asking me why I wasn’t singing something authentic or ethnic so my second album tried to do that. In my second album “Coming home”, I was singing more vernacular. By the time I was singing my fifth album it was completely vernacular and would go to the village sit with the old people to get inspiration. My music is inspired from the deepest parts of Zambia.

L.V Do you feel accomplished as an artist?

MLL No I don’t feel accomplished yet. I think I am still exploring. The facilities here are not readily available though I would still like to do some voice training, perfect my instrument playing especially the ethnic instruments.

L.V What is your view on Piracy?

MLL For a very long time I have always said that piracy is an evil system that is here to stay. With concerted efforts I think it can be reduced but not stopped completely. You go to the boarder towns and see fake CDs with your name being sold. I have been affected by piracy. Apart from the royalties that I get from outside, what we get here in Zambia are peanuts. For a complete year, you can get K5000 only.

L.V How do you rate other Zambian artists and the quality of music being produced?

MLL Zambian artists are doing the best with what they have. Not everyone is priveledged to go out there, get proper producers and studios. It would be nice if there is investment in instruments and expertisee. The situation at the moment is like having mealie-meal, water and charcoal but expect someone to bake a cake. Artists are doing the best they can with what they have.

LV Which has been your best award so far?

MLL The one I was awarded by Plan International. Being the goodwill ambassador help with my charity work. Other awards were just personal but with this one I work with people more.

L.V What life lessons have you learnt through music?

MLL You have to up your game all the time because it is an ever evolving business. You have to stay with the trends. Learning not wanting to be popular but relevant.