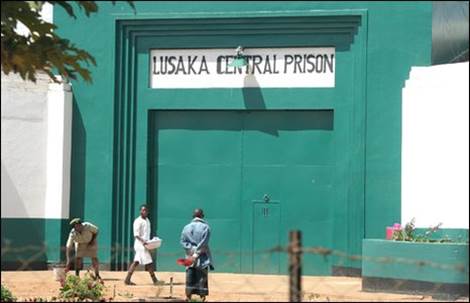 A SEEMINGLY drunk man on Tuesday caused commotion at Kabwe High Court grounds during the ongoing Supreme Court sittings when he dared police officers to arrest him because he wanted to go back to prison.
While Supreme Court judges Gregory Phiri, Muyinda Wanki and Elizabeth Muyovwe were sitting, the man only identified as Mulenga screamed at police officers and in the process disturbed court proceedings.
“I want to go to jail today,” Mulenga said while daring police officers that he was not afraid of them.
This prompted Mr Justice Phiri to instruct police officers and court officials to deal with the situation and to stop those making noise.
Police officers moved swiftly, apprehended Mulenga and dragged him to the entrance of the courtroom but he pretended to be unconscious.
Some court officials took Mulenga outside and poured water on him in a bid to ‘resuscitate’ him.
Mulenga jumped to his feet and protested to police officers, prison warders and court officials for pouring water on him.
A police officer identified the man as Mulenga, who was jailed at Mpima State Prison after being convicted of malicious damage to property by the Kabwe Magistrate’s Court.
Mulenga, who seemed determined to be cited for contempt of court, caught the attention of passers-by who stopped to watch the spectacle.
Some prisoners also joined to help drag Mulenga away from the courtroom and left him sprawling on the grass but he again emerged and dared police officers to arrest him.
When it became apparent that Mulenga made up his mind to go to jail, police officers apprehended him and took him to Kabwe Central Police Station.